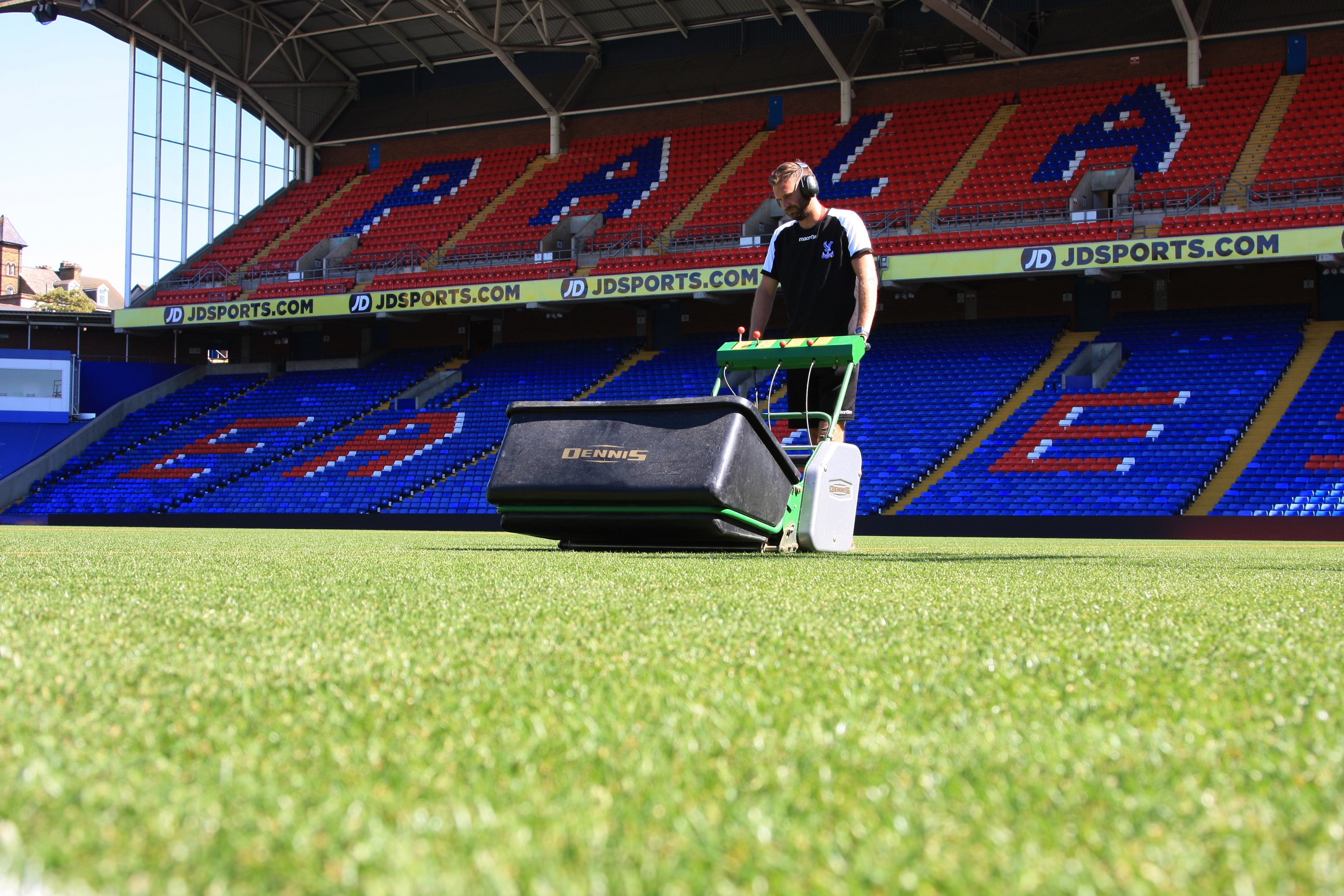 Bruce has been in his current role for just over twelve months and has been in football groundsmanship for a number of years including roles at Reading FC and Fulham FC.  With extensive knowledge of the industry, he knew exactly where to look when the time came to purchase a range of mowers.

“I’ve been in the industry for over 20 years and I’ve always used Dennis mowers. They’ve always provided me with great reliability so they were the only machines we looked at.”

As a long-term user of the Dennis G860, Bruce already had two of them at the Selhurst Park Stadium and he explained how they are used as part of his maintenance programme.

“At the stadium we use the G860’s all the time for mowing, for presentation and for the final cut on match days – which we cut at 23mm. They are just perfect for achieving that perfect finish building up towards a match.”

“We’ve got the 8-bladed cutting cassettes, the multi-dense brushes and the verti-cut units – which work in conjunction with one another really well. For example, after a pre-season friendly against Valencia, the manager and players felt that the pitch was a little bit too thick, so we put the verti-cut unit in and thinned the sward out slightly. Combined with the brush which takes the debris and loose grass off after a game, both of these cassettes have really helped to remove debris and allow new growth to come in.”

As Bruce says, the G860 features an interchangeable cassette system which gives the user the option of fitting 11 quick changeover cassettes including scarifiers, verticutters, brushes, spikers, and slitters as well as 6 or 8 bladed cutter cassettes.

Featuring a large diameter front roller with an adjustable scraper which has been designed for a precise height of cut control, giving an excellent finish, it also weighs in at just 166kg making it perfect for stadium pitch mowing.

“Previously we had two ride-on mowers at the training ground and they needed replacing as they were becoming less reliable. The club were willing to invest a bit of money into new equipment and we knew what the Dennis G860’s were giving us at the stadium. So that’s what we went for and the training ground has certainly improved since. It allows us to get a far better finish on the pitches, far better presentation and also it gives us the flexibility that we require. On a day to day basis with the G860’s, we’ll be cutting in the morning and then brushing the trained-on areas afterwards.”

Bruce also revealed that it does make life easier with Dennis being a British manufacturer.

“We like to buy British if we can for the availability of spares but we chose to buy the G860’s because we consider them to be the best mowers on the market.”

Dates for Dennis and SISIS and Bowls Scotland Seminars Announced

Dennis and SISIS to sponsor US Bowls Championships 2016

Two Promotions at Dennis and SISIS