Rob Lane, Head Groundsman at The Hawthorns stadium, recently decided that a Dennis G34D cylinder was the mower that would help him achieve that all important pitch-perfect-presentation.

Back in the seventies when Rob was stood in the stands watching his beloved West Bromwich Albion FC, little did he know that he would one day be responsible for looking after the pitch. Fast forward a decade and he was about to do exactly that.

“I wasn’t good enough to play the game, but I knew I wanted to be involved in football,” he said. “That was when I first thought about becoming a groundsman. So, I contacted all the football clubs in the area closest to me, and the only vacancy available was at my childhood club. I jumped at the chance. My whole family are West Brom fans, so it was a proud moment.” 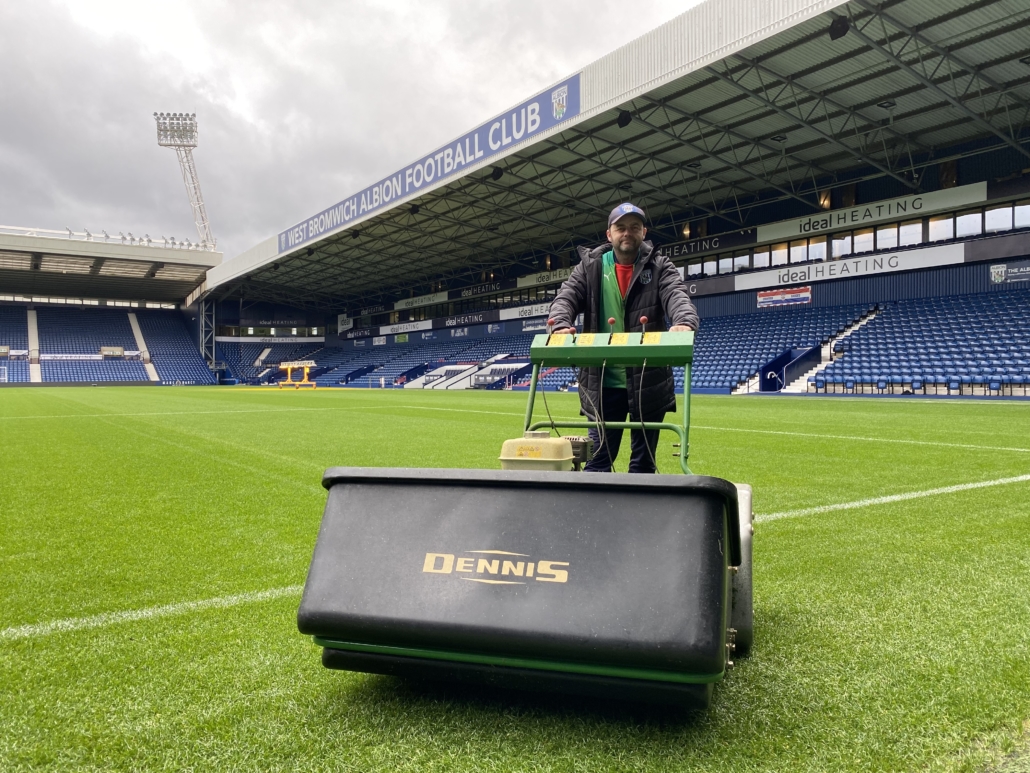 Rob embarked on a Youth Training Scheme (YTS) which included a day release where he studied Sports Turf at college. That was in 1988 and he has been at the club ever since.

The one-club man is committed to preparing the best pitch possible for the players, the staff, the fans, and of course his family, so Rob never cuts any corners. Therefore, when it came to finding a new mower to give the pitch that all important matchday cut, it was a decision he was not going to rush into.

“Our previous mower we had for presenting the pitch needed replacing and I looked long and hard at what was available,” he said. “I just couldn’t look past the Dennis G34D and that was based on our experience with the Dennis G860 cylinder mower – which is a machine we use a lot here. It is the same height; the same weight and we liked the thought of having two Dennis mowers for the pitch. It would be nice and uniformed.”

As Rob says, the Dennis G34D has been designed and built following the same concept as the popular Dennis G860 cylinder mower. Available in three different cutting sizes – 26”, 30” and 34” – the mowers incorporate a large-diameter eight bladed cutting cylinder to cater for a wide range of uses to leave a precision cut. The handlebar design makes manoeuvring easy and the wide adjustment makes it comfortable for all cutting heights.

Rob now uses the two mowers in conjunction with one another to prepare the pitch. While using cassettes such as the verticutter and the brush on the G860, he will save the G34D for matchdays.

“On a Friday before a game we will use the G34D to cut widthways and then on a Saturday morning we will cut lengthways,” he said.

“It provides a fantastic finish every time. We also like the fact that if it is a bit dewy or a bit wet then it doesn’t drop the grass clippings like our old machine used to. It also has a much bigger grass box to get more in and you don’t have to keep stopping to empty it.

“I’m very pleased – it is a superbly engineered mower.”

Confidence is the key

Two Promotions at Dennis and SISIS

Dennis FT510 turns it around at Maldon