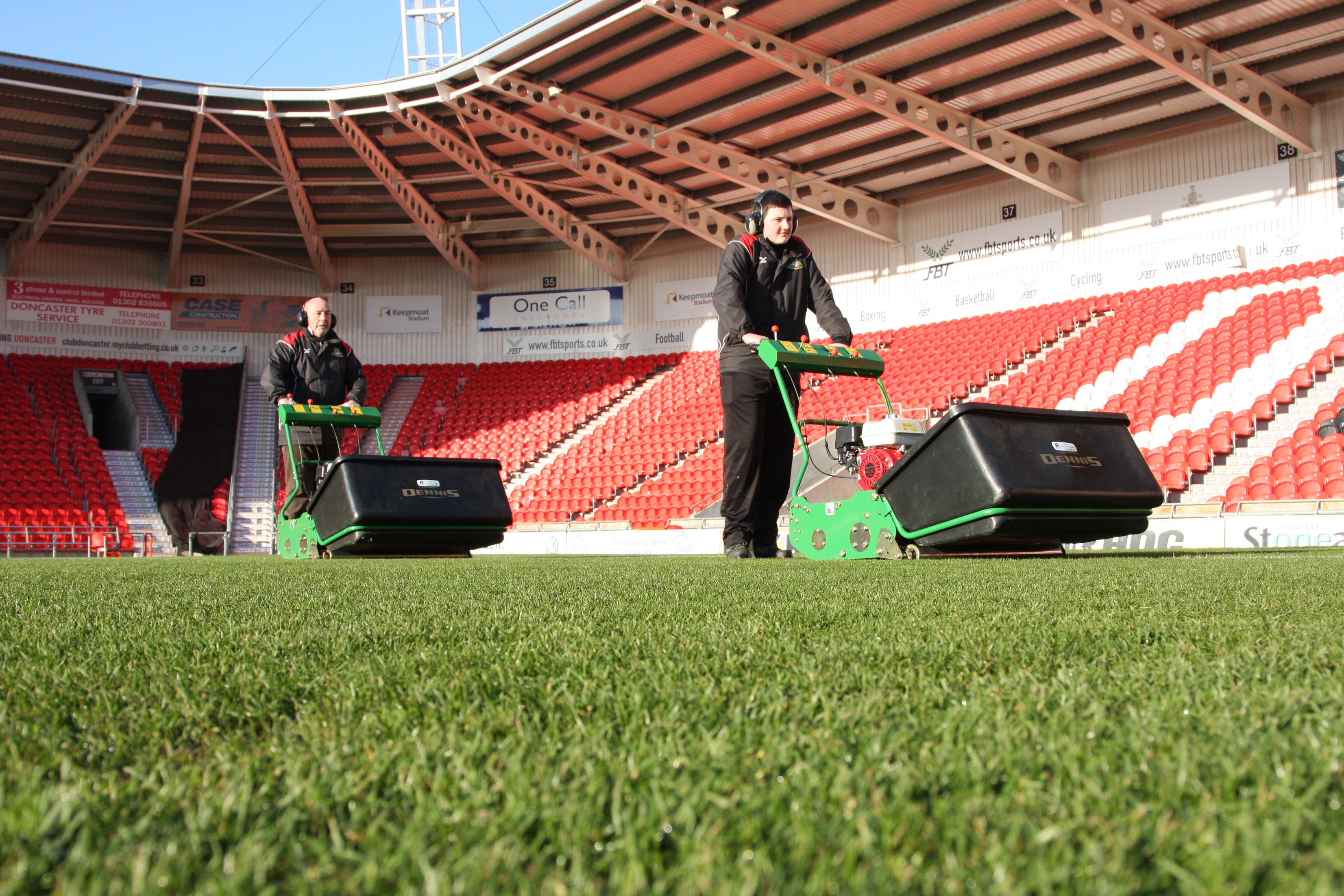 It is fair to say that not one day is ever the same for James and his four members of grounds staff. Not only are they responsible for the Keepmoat Stadium – the 15,000 capacity stadium which is home to Doncaster Rugby League FC, Doncaster Rovers Belles and Doncaster Rovers FC, but they also tend to a 500 seater stadium containing a six lane running track for athletics and maintain Doncaster Rovers FC’s training complex at Cantley Park.

“It is a unique set-up we have here,” says James. “Most days you’re not just coming in to mow the pitch – you might be trimming some trees or tending to the memorial garden – there’s a number of varied tasks which we carry out on a daily basis.”

With the pitch at Keepmoat in constant use by three sports teams, James and his team are kept busy and just last year their hard work was recognised when the RFL recommended them for the Institute of Groundsmanship’s (IOG) Grounds Team of the Year.

“Unfortunately we didn’t quite win it, but we were highly commended,” says James. “For the amount of games that are played on the pitch, I believe it is quite an achievement. We put a lot of dedication into what we do and have incredibly high standards.”

According to James, it is for this reason that he chooses Dennis mowers when it comes to maintaining the pitch.

“When the stadium was first built we had two Dennis G860 cylinder mowers. Soon we will be celebrating the stadium’s 10 year anniversary and throughout that time the G860’s have always done a first-class job. I’ve never had any problems with them so why change a brand when it does everything you want it to do?”

Based on his experience of using the G860’s, James purchased two of the new Dedicated G-Series range of mowers, which have been designed and built following the same concept as the Dennis G860 machine. Available in three different cutting widths – 26”, 30” and 34” – the mowers incorporate a large-diameter eight-bladed cutting cylinder to cater for a wide range of uses to leave a precision cut. The handlebar design makes manoeuvring easy and the wide adjustment makes it comfortable for all cutting heights.

“We wanted something which we knew we could trust and the finish on these mowers is immaculate. They’re not too heavy, you can move them easily, and for me they are everything – quite simply an excellent and vital tool to have in our armoury.  Whether you are in the Premier League or non-league – Dennis mowers are everywhere and that’s testament to the build quality, the reputation they have for customer service and the presentation of the pitch that they help the groundsman to achieve.”

James uses his G34D in his match day preparations which start with a double cut on a Thursday before a game, and then subsequent double cuts on the Friday and on the Saturday. He admits that a long-term element of superstition plays a part in three double cuts over the course of three days – but so far the results speak for themselves.

“It seems to work and I’ll continue to do it all the time it is working,” says James. “Dennis mowers provide you with that wow factor and it also means that for a club with our resources we can still achieve a finish like any of the Premier League clubs.”

Dennis and SISIS to sponsor US Bowls Championships 2016

Fab 4 for Dennis & SISIS at BTME

Dennis and SISIS to take centre stage at SALTEX 2016