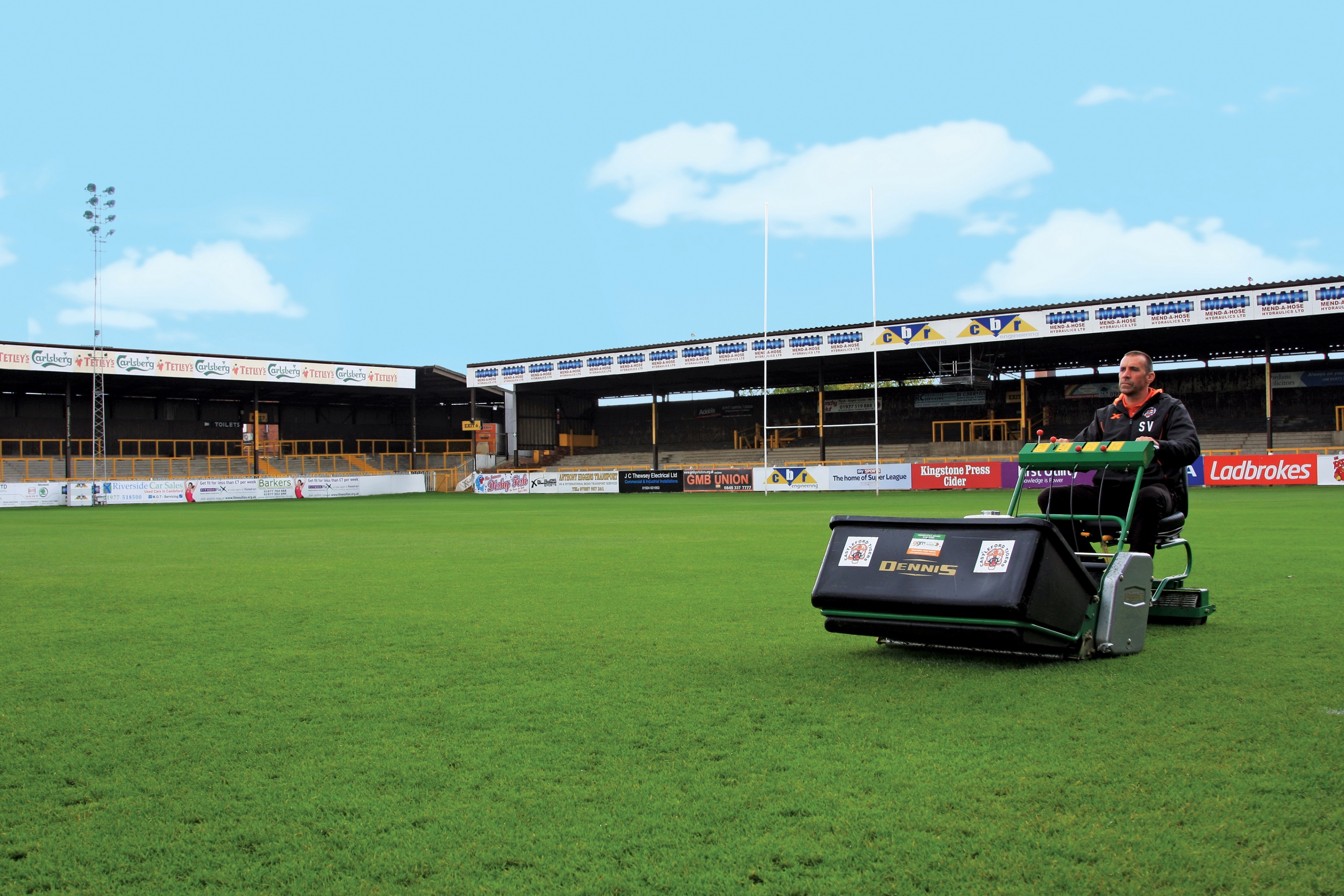 Dennis G860 makes Tigers self-sufficient. After having to rely on outside assistance for the past few years, Castleford Tigers RLFC are now able to keep all of their turf maintenance tasks in-house after purchasing a brand new Dennis G860 cylinder mower.

Stuart Vause has been involved with the club for 13 years part time and 3 years as head groundsman after 30 years in the trade working for a local authority.

In that time it is fair to say that he has had his work cut-out, which has not been helped by an ageing pitch and an overload of fixtures.

“The season runs from February until the back-end of September and the first-team has approximately 17 home games. In addition, the Under 19’s and Under 16’s play their home games here and the first team also train on it four times a week during the season. Sometimes the pitch can be used up to six times a week and that is quite a lot for an ageing pitch which has no drainage or irrigation system.”

Without having the equipment to hand, Stuart would have to rely on favours here and there from fellow local groundsmen and would also have to call in outside contractors.

With limited resources Stuart continued to do a remarkable job but when his ride-on mower appeared to have had its day, he knew the time had come to seek investment and look for a new machine.

“Our previous machine wasn’t really the ideal tool and we were having a lot of break-downs,” says Stuart. “My main aim was to become more self-sufficient and I wanted one machine that I would be able to complete a range of tasks with.”

“I looked at a whole range of mowers. I spoke to other groundsmen and got their advice; I did my own research looking online and comparing various mowers and looked at what other users had said about them. The Dennis G860 kept coming up and from my previous position of working for a local authority I was already familiar with the brand. We used to have Dennis mowers for a number of bowling greens and cricket wickets so I knew that they were robust, performed excellently and any replacement parts were easy to get hold of.”

As Stuart says, his research led him to the Dennis G860, which is the ideal machine for someone looking to complete a number of tasks with just one power unit.

Featuring an interchangeable cassette system, users have the option of fitting different types of heads including scarifiers, verticutters, brushes, spikers, and slitters – something which Stuart is particularly impressed with.

“In my opinion, the G860’s best feature is the interchangeable cassette system – it’s unbelievable.  It means that you’ve got one machine for so many jobs and it’s just so easy – one-out-one in – and if you have a good day at it, you can scarify, brush, and cut all in one day.”

“I’ve got the 8-bladed cutting cylinder, the verti-cutting cassette, the tungsten tipped verti-cutter and the soft brush – which has made my life a lot easier in clearing debris from the pitch after a game. Before I would have to use a hand-held blower and walk round the pitch blowing the debris into piles and then gather it all up. So instead of it taking me approximately three hours after a game, I can now get it done in no time at all and can collect it at the same time as well.”

“The G860 got delivered in June this year and since then, our supporters, players and even away players and coaches have commented on how the pitch has never been this good before. It’s made a massive difference.”

“I’ve always wanted to be more self-sufficient, and I now feel as though I finally am and the grass is the healthiest it has ever been. The improvements that I’ve had in just six months have been amazing so I’m looking forward to seeing how much more of a difference it will make after having the G860 for a whole year.”

Bigger is better for SALTEX 2017 exhibitors

MM60 – the number one choice for the Eagles
Scroll to top