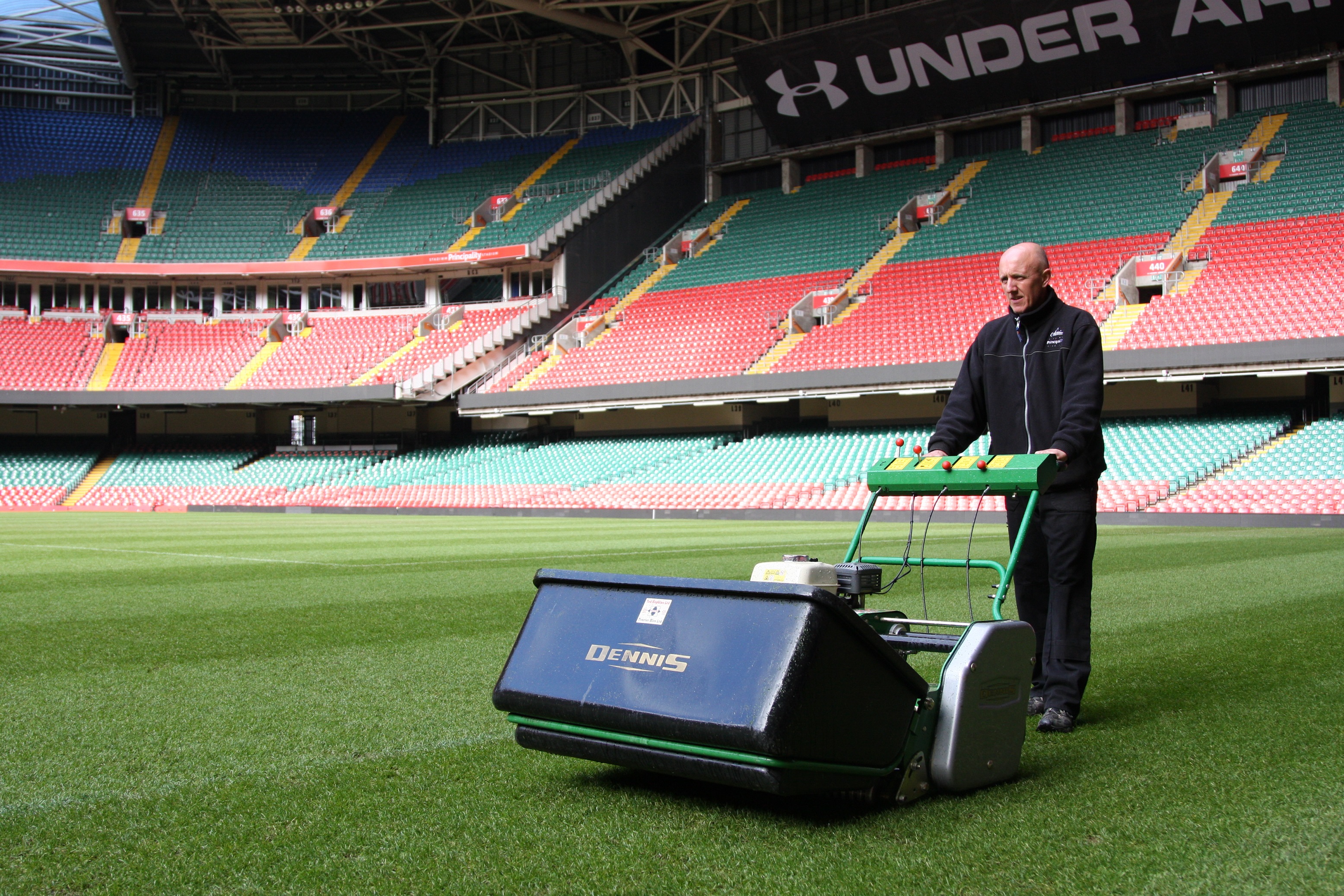 Since opening in June 1999, the Principality Stadium (formerly known as the Millennium Stadium) has welcomed, on average, over 1.3 million visitors per year. It has played host to two Rugby World Cups including the final in 1999, three Wales Grand Slam successes in the RBS Six Nations, six FA Cup Finals and also witnessed a multitude of concerts with some of the world’s leading artists in the music industry.

Since embarking on his role twelve years ago, head groundsman Lee has seen most of these events take place. With an impressive CV, including roles at Fulham FC and Aston Villa FC, it is safe to say that he knows how to get the very best out of a playing surface. Therefore, when Lee started his position at the Principality Stadium he knew exactly what turf maintenance equipment he needed.

“I’ve been using Dennis mowers for as long as I can remember but when I first came here we didn’t have any – so I soon changed that. Obviously there were other machines available but I preferred the Dennis Premier machine which I had previously been using. Compared to what we originally had, the Dennis Premier’s quite simply provide a better cut and finish.”

The Dennis Premier is available in 30” and 36” cutting widths. A three section rear roller and steering brake make it easy to manoeuvre giving an excellent stripe and rolling characteristics. Complete with a large diameter front roller with adjustable scraper, for precise height of cut control, the machine is easy to adjust on both sides with the use of a single spanner.

Lee purchased two Dennis Premier’s and soon added to his collection after seeing the Dennis G860 in action. Featuring an interchangeable cassette system, giving options to fit a variety of heads including scarifiers, verticutters, brushes, spikers, and slitters as well as 6 or 8 bladed cutter cassettes, the G860 is relied upon in stadium environments all over the world – and Lee hasn’t looked back since.

“I had heard a lot of good things about the G860 so I trialled one to see what it was like and I was really impressed. It’s basically a multitude of machines in one which is great and saves you a lot of time.”

“The best feature on the G860 is the flexibility it offers – you can simply change a cassette as opposed to buying a new machine. They are so reliable and seem to go forever. They also give a great cut, they are light and they leave an excellent stripe behind them.”

In fact, Lee thought that they were so good that he ended up purchasing three of them so that all three of the full-time grounds staff could have one each. Combined with their two Dennis Premier’s, Lee explained how the two machines perfectly complement one another in his pitch maintenance procedures.

“Leading up to a game, when we want to get a first class finish and stripe, we will introduce the Dennis G860’s. After starting with the G860’s we then take hardness readings with our Clegg hammer and if the pitch requires firming up a little bit more for any reason we use the Dennis Premier. Immediately after the game we then return to the G860 with the brush cassette to clear away any debris.”

“Aside from match day preparation we also use the G860 with the sorrel roller cassette in between games because it helps keep the surface open and prevents algae from forming. We even use it pre-season and prior to overseeding – just to get even more holes in the surface to let the seed in.”

“Overall it’s a fantastic piece of kit and is the perfect machine for us here.”

Dennis and SISIS at BTME 2014 – Built to Perform

Dennis and SISIS – Back in the USA