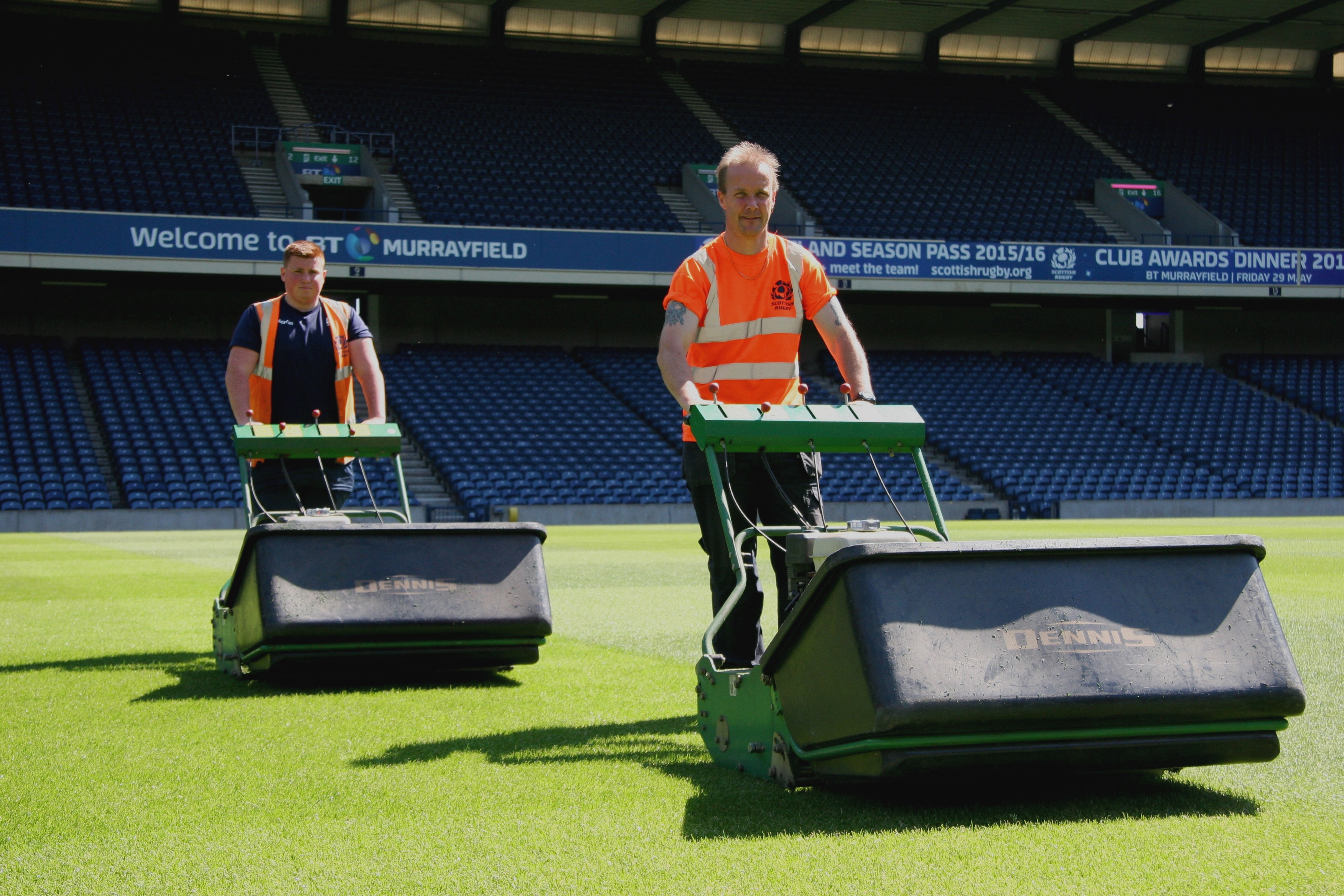 Jim Dawson, head groundsman for Scottish Rugby at the BT Murrayfield Stadium, has praised the role of the Dennis G860 professional mower in helping him maintain the pitch at Scotland’s largest sports stadium and with it win the IOG Groundsman of the Year Award.

With an interchangeable cassette system including scarifiers, verticutters, brushes, spikers and slitters as well as 6 or 8 bladed cutter cassettes, the Dennis G860 is trusted by groundsmen around the world as the most versatile cylinder mower on the market.

Lightweight at just 166kg, it is easy to see why the G860 is so popular at so many sporting venues both in the UK and abroad. In fact, ever since becoming acquainted with the G860 at the start of his career, Jim has not felt the need to use any other mower. “It all started when I worked for Falkirk FC and we were moving from Brockville Park to the new Falkirk Stadium. We felt that the mowers we were using at the time were not good enough for the new pitch – it just wouldn’t be able to sustain the weight of the machines.

“So we spoke to our dealer, Henderson Grass Machinery, and they were full of compliments about the Dennis G860. We decided to trial the mower and I thought straight away that it was absolutely outstanding. I’ve not used another machine since,” he said.

It was during his time at Falkirk FC that Jim really started making his mark on the industry. His excellent work saw him win the Scottish Football Groundsman of the Year Award twice and he also picked up third place in the award for the Professional Football Groundsman of the Year – an award which takes into consideration the work of every groundsman in the entire UK. It is accolades such as these which made his move from Falkirk to Murrayfield possible.

Jim and his three members of staff certainly have their work cut out at the stadium. Not only do they attend to the main pitch – a brand new Desso GrassMaster, but they also look after three grass pitches consisting of fibre sand, a synthetic pitch and all of the stadium’s surroundings. With such a demanding workload, Jim believes that the Dennis G860 undoubtedly helps the team keep on top of things.

“The G860 is a major help to us here at Murrayfield. The precision of cut is excellent, it’s extremely versatile and it’s so easy to manoeuvre. The interchangeable cassette system is by far the G860’s best feature – you can change them over within a matter of minutes. This definitely saves us time.

Jim and his team use two G860’s to cut the pitch every day, preferring the hand cutting method.

“The weight is another great thing about the G860’s because you can actually take weight out of the mowers which is perfect for transporting them.
“Overall, I couldn’t recommend the Dennis G860 highly enough.”

Dennis G860 is top for a Scotsman in Spain

Dennis Mowers: “A pedigree no-one Can argue with”

Complete Weed Control go ‘above the call of duty’ for world’s greenest...