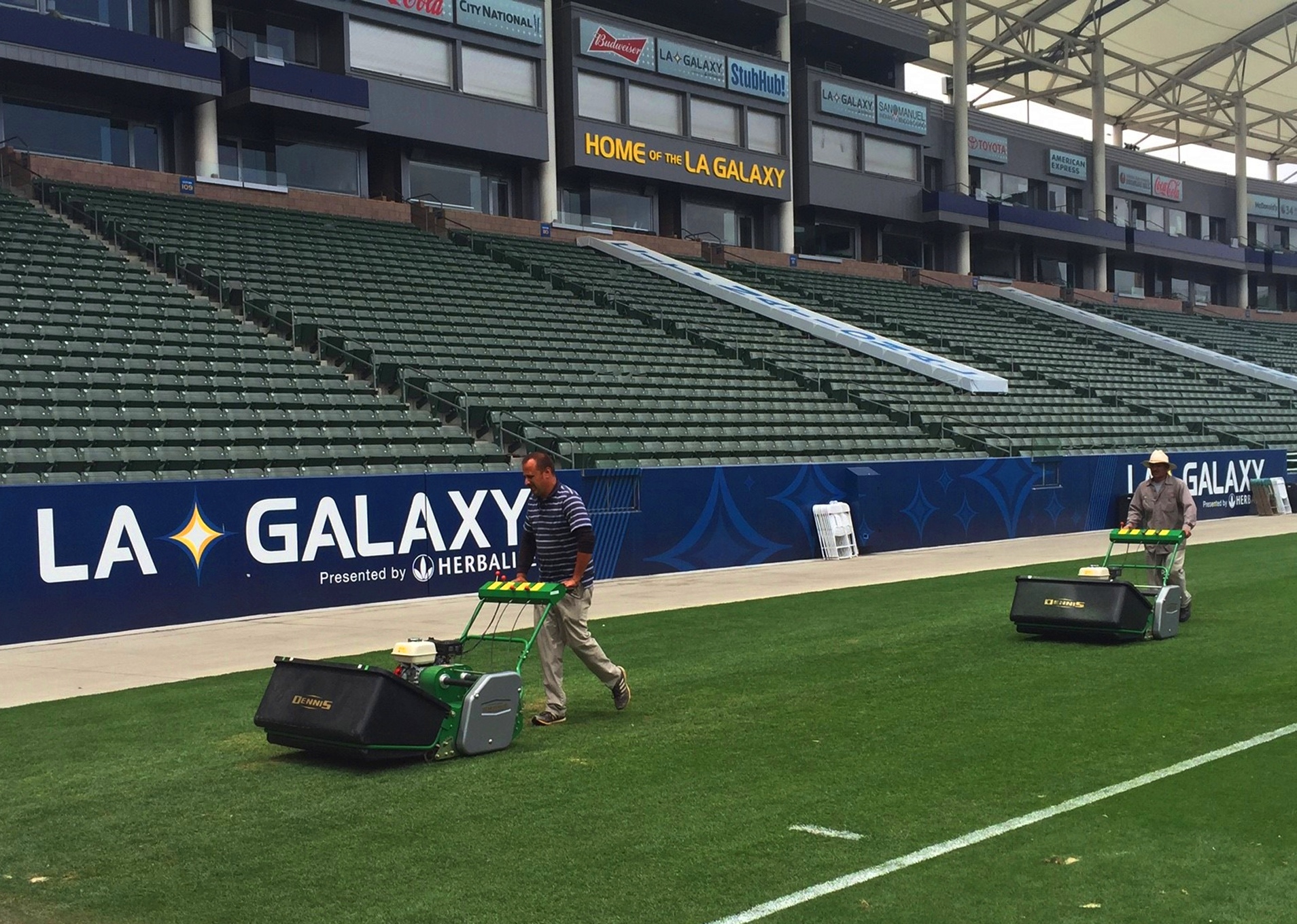 Dennis G860 – Star of the Galaxy. Shaun Ilten, Director of Turf & Grounds at the StubHub Center, has had the privilege of seeing some of Britain’s greatest stars grace the turf at the home of Major League Soccer’s LA Galaxy.

It has also been relied on as a summer training base for some of the world’s most successful teams including FC Barcelona and Chelsea FC.

Having previously used a ride-on mower in his turf maintenance procedures, Shaun decided it was time to look towards the benefits of a pedestrian cylinder mower in order to reduce the weight going onto the pitch and eliminate tyre tracks.

Fortunately, Shaun already had a mower in mind following a recent tour of some of Britain’s finest football stadiums.

“I went to a number of great stadiums across the pond and the one thing that they all had in common was that they were all using Dennis mowers and in particular the Dennis G860,” says Shaun.

A demonstration of the G860 was quickly organised through CS Trading – the North American distributors for Dennis and SISIS; and one feature of the mower which instantly made an impression on Shaun was the interchangeable cassette system.

“The multi-use function is what sold me on it. The procedures I mainly undertake are mowing and verticutting so I thought it would be ideal to have a product that can do both of these, with something as simple as swapping a cassette over depending on what you want to use it for.”

As Shaun says, the Dennis G860 features an interchangeable cassette system, giving options to fit a variety of heads including scarifiers, verticutters, brushes, spikers, and slitters as well as 6 or 8 bladed cutter cassettes.

The operator can use just the one mower for a number of tasks with a simple one-minute changeover of cassettes.

The G860 certainly ticks the box in terms of Shaun keeping weight off the pitch – lightweight at just 166kg; it is easy to manoeuvre and comfortable to operate.

The handlebar console houses the controls – throttle, park brake, switches and cutter clutch and only the forward drive handle needs to be held in by the operator which reduces operator fatigue.

The mower also features a large diameter front roller with an adjustable scraper which has been designed for a precise height of cut control, giving an excellent finish on every occasion – something which Shaun is particularly pleased with.

“It is easy to use, maintain and it creates one hell of a stripe which is excellent for presentation. Every stadium I visited in the UK you saw the Dennis stripes. Walking behind these mowers helps you develop a touch and feel for your own pitch helping to get the job done better than I had ever anticipated – the results are outstanding.”

Shaun and his team continue to be impressed by the threes G860’s supplied by CS Trading LLC, that he has already recommended the product on a number of occasions.

“I have already recommended the G860 to quite a few people, so hopefully when they see the light and decide to buy a couple, they will be as impressed with the product as I am.

“Overall this really is a first-class product which is complimented by top-notch people out in the field spreading the word.”