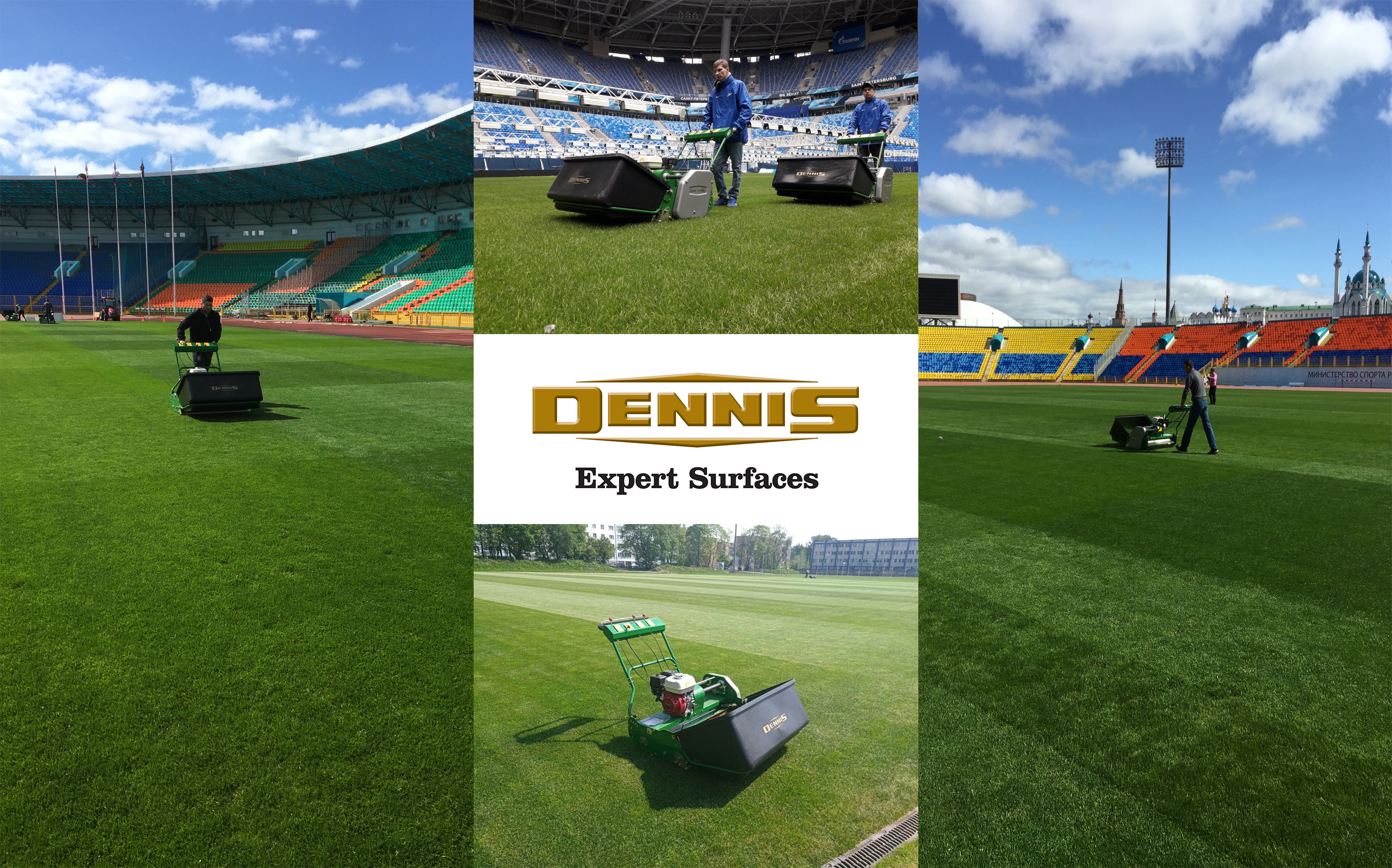 Dennis Mowers prepares for 2018 World Cup. The national football team won’t be the only team of professionals flying from England to Russia this summer. In fact, a whole fleet of Dennis G860 cylinder mowers will already be making their mark in Russia before the England squad is even announced.

After being selected as the official mower at the two most recent FIFA World Cup’s in South Africa and Brazil, the 2018 tournament in Russia is the third successive World Cup that the Dennis G860 has been selected as the mower of choice.

A staggering 88 Dennis mowers will have the task of preparing stadium and training complex pitches for the world’s greatest football players throughout the tournament while some venues will also utilise the Dennis Premier in conjunction with the G860 for matchday preparation.

7 of the 11 stadiums will use Dennis mowers, including those hosting the quarter finals, the semi-finals and the final, and 70% of the training camps will also be maintained by Dennis.

Steven Rienks – managing director of Queens Grass, who are the official Dennis dealer in Russia, has orchestrated proceedings and admits it is a proud moment for himself and his company.

“This is the greatest show on earth and is not just another contract.  Yes, it is fantastic to be a part of it but it is also a responsibility,” he says. “After all, the quality of play depends on the quality of the pitch. But this is why the G860 has been chosen – due to the quality and the presentation it offers. They all want that perfect stripe which the G860 provides because they know it will be watched by a worldwide audience.”

However, the task of preparing the pitches is made slightly more difficult by unfavourable weather conditions, as Steven remarks: “In Russia, the weather is not ideal – for instance, in one area we only have around 60 days of sunlight over the course of a year. The interchangeable cassette system really helps with maintenance procedures in a difficult climate. Also, the mowing height may differ and the sandy materials on the pitches are different.”

While the games will no doubt attract billions of viewers worldwide, many will be oblivious to actually what goes into ensuring the pitch is up to the standards expected for a tournament as prestigious as the World Cup. Even before the pitch is prepared, contracts must be concluded and signed and Steven admits that it can be somewhat of a rigorous process.

“Russia is a whole different ball game and one of the attractions of working with companies such as ourselves is the fact that we have been working with the groundsmen at the stadiums since 2001. Russian clubs prefer to be supported by local companies that supply European machines but quick, straightforward contracts are hard to make.”

“Every offer was made specifically for each stadium and training complex and all were tendered by the Russian Government. Then of course there are the complications of dealing with an eastern European country – let us say that the customs and borders in Russia are an interesting challenge.

“It is not easy but of course it is fantastic to work at such a tournament. We love our profession and it is a nice challenge to have!”

Dennis and SISIS to take centre stage at SALTEX 2016

Sierrablen Plus a game changer at Castleknock

Sierrablen Plus a game changer at Castleknock
Scroll to top