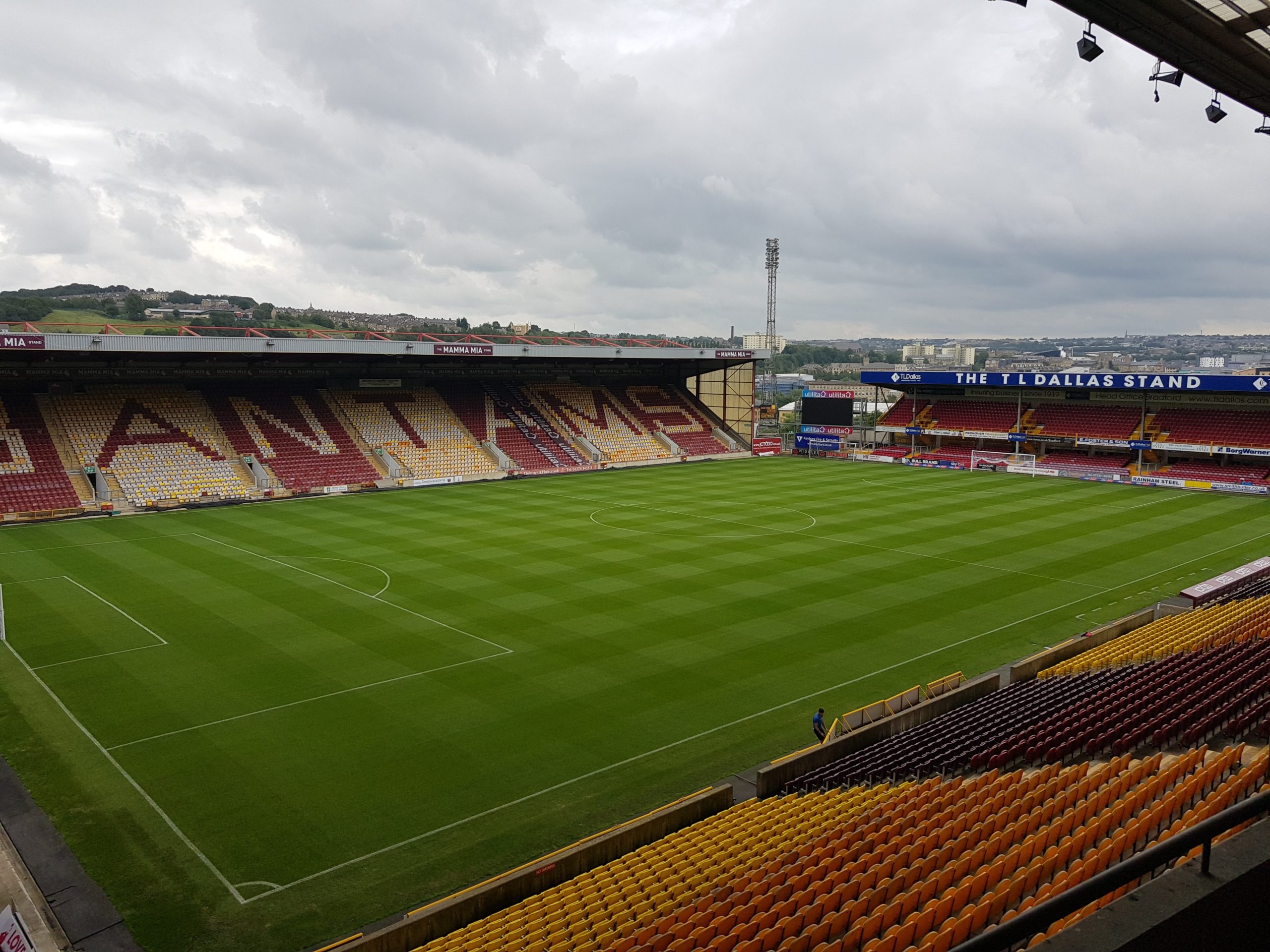 ICL’s ProSelect grass seed supported by a monthly nutritional programme has resulted in Bradford City’s pitch being in the best condition ever – according to Head Groundsman Mick Doyle.

If anyone knows the pitch at Bradford City’s Utilita Energy Stadium – it is Mick. He has been working at the club for an incredible fourteen years and in that time, it is safe to say that he has single-handedly kept the pitch in excellent condition.

However, he claims that the bar has now been raised and that it all started with ICL’s ProSelect grass seed.

“The bottom line is that I needed a new seed,” he said. “The seed I used previously just didn’t work for me – it was patchy and did not germinate. Therefore, when it came round to pitch renovations last year, I used ICL’s ProSelect 1 Premium Pitch which I had first heard about at an ICL educational day and after speaking to other groundsmen.”

Combining four top-ranked perennial ryegrasses, ProSelect 1 Premium Pitch, provides a fast-recovering, dense, hard-wearing surface. Furthermore, Mick decided that he would like to explore a full ICL nutritional programme because in his words, it would be a “one-stop shop which could deliver on all fronts.”

Prior to sowing the ProSelect seed, Craig Lalley, Technical Sales Manager for ICL visited Mick at the stadium and took some soil samples. Craig then proceeded to devise a plan tailored to Mick’s environment – taking into consideration his stadium, his machinery, his staffing levels, his time restraints and he ultimately put a programme together based on what Mick was trying to achieve.

“My biggest concern was that I could never get any root down but Craig assured me that I would with his programme,” said Mick. “True to his word – he was absolutely right.”

The key was getting the pitch off to the best possible start. After sowing the ProSelect grass seed, Mick immediately followed with 10 litres of H2Pro TriSmart, in a bid to absorb more moisture around the seed and aid germination.

It turned out to be a winning combination: “The seed was coming up beautifully in just six days,” said Mick.

On that sixth day after seeding, and based on Craig’s advice, Mick went one step further by applying Sierrablen Plus Renovator 20-20-8 at a rate of 35g/m², the mini-granules ensuring even distribution for young seedlings while its high phosphate levels encourage strong root growth.

Since then, the nutritional programme has been based on providing the right nutrient at the right time, according to Craig.

“A lot of the programme has been designed to really focus on root establishment to assist with pitch playability. Therefore, Mick has been using Vitalnova SeaMax (seaweed extracts) and Vitalnova Blade along with Primo Maxx II growth regulator.

“Mick has produced a great surface this season and that has carried through the challenging winter months. To work alongside his good cultural methods over this testing period, Mick incorporated H2Pro FlowSmart into his monthly ITM programme. This is a superb penetrant to help with water percolation through the profile.”

Mick was also in agreement:

“I’ve had fourteen seasons here and I can honestly say that this is the best condition the pitch has ever been at this time of year. I put that down to the products.

“The pitch is holding up incredibly well and you can hardly tell that players have been on the pitch after a game. In years gone by where we have had shallow rooting a lot of remedial work was needed following fixtures. This is no longer required so we are saving time and benefitting from good plant health.

“The programme is very straight forward to follow – it’s all on my wall planner in my office and reminds me of what’s going on at all times. I can also call Craig and get advice which is a real benefit.

“Overall, I’m incredibly pleased that I decided to go down the ICL route because it really has made such a difference to the pitch – not just aesthetically and from a playability point of view, but also from what is going on below the surface.”

Sherriff taking Bovey Castle back to the top

Can sand dressing provide a solution to worm casts?