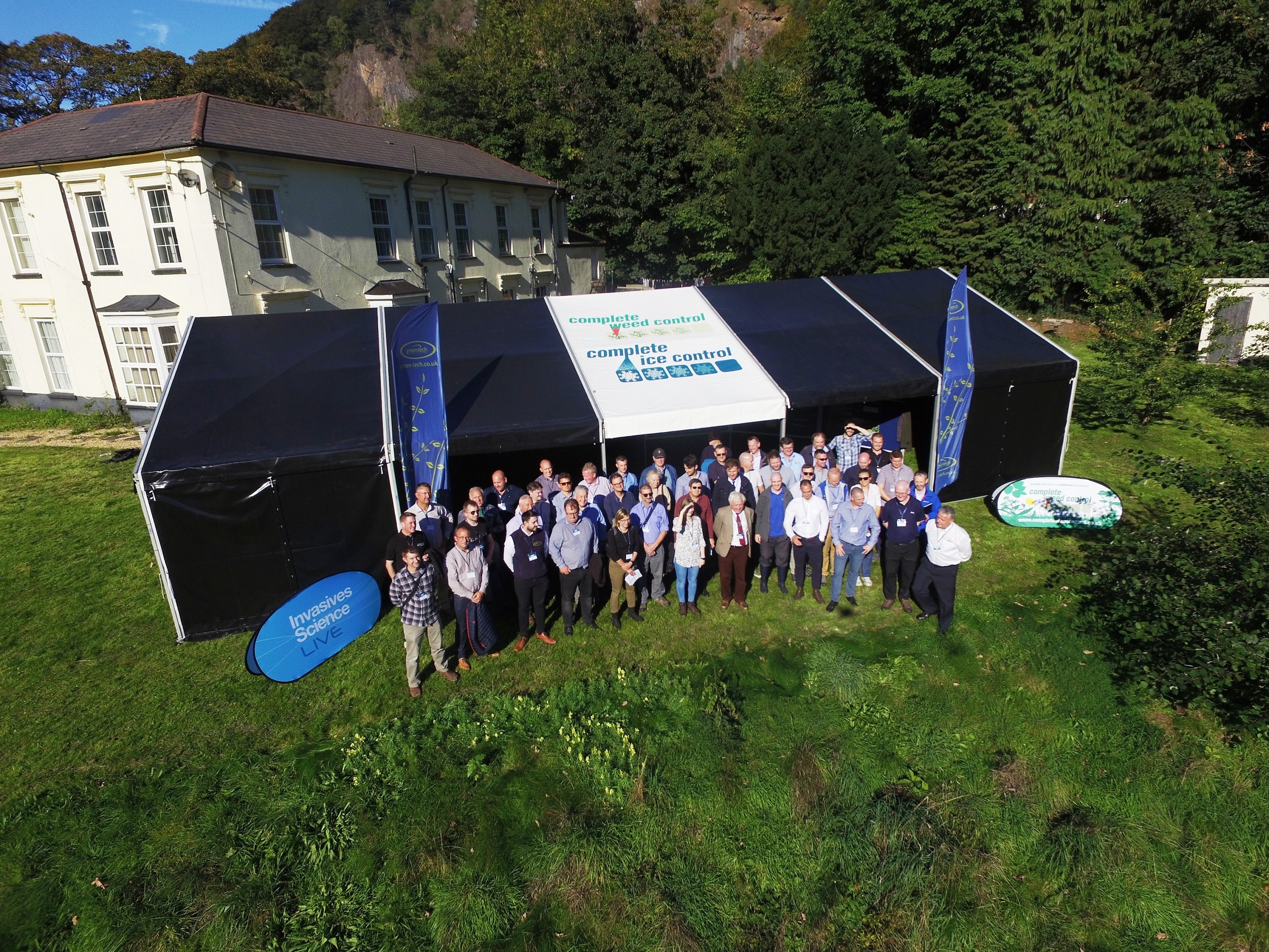 The event, held in Cardiff, was hosted by ICL, Complete Weed Control and Green-tech in association with Advanced Invasives and provided education for delegates to gain a better understanding of chemical performance and various control methods, focussing primarily on Japanese Knotweed and Himalayan Balsam.

Complete Weed Control Managing Director Ian Graham introduced the event by offering an insight into the recent trial work with Advanced Invasives – something which the delegates would later explore in more detail at the impressive private trial facility.

Roundup Technical Development Manager Barrie Hunt from Bayer was the first speaker to provide an update on legal and best practice information of glyphosate to help plan ahead of their 2019 weed control programmes.

Next was Dr Dan Jones, Managing Director of Advanced Invasives, to give an insight into their seven year-long field trial on Japanese Knotweed control – the largest in the world. The ai:LAB is the company’s 12 acre field-testing site in South Wales where research has been undertaken into how to best tackle invasive plants in real-world conditions. The research tested 19 methods over 3 years of treatment and sets a new standard for evidence-led research.

Following Dr Dan Jones was Business Director Dan Clugston to explain the dangers of Japanese Knotweed, how it is best dealt with, and the impact it can have on property.

After lunch, delegates were transported to the nearby trial site where they were separated into three smaller groups in which they visited three specific work stations.

Iván Martin from Advanced Invasives explained how a number of land managers are reluctant to use herbicides to control this plant, and that ‘Balsam Bashing’ - physical control, is a popular treatment for many conservationist groups. He went onto reveal research which consisted of benchmarking the four most commonly used balsam treatments in 5×5 m (25 m2) commercial field trial plots.

Of the treatments tested, herbicide spraying was not only fastest but also was the only treatment that does not create plant waste - and Iván claimed it is an advantage that needs to be considered when weighing the environmental benefits of treatment options.

Sophie Hocking from Swansea University and Complete Weed Control’s Ian Graham were on hand to explain how re-invasion by knotweed and secondary invasion by other plant species can often hinder future development. Sophie and Ian stated the necessity of a shift from a single, target species approach to a whole ecosystem view of recovery. This station highlighted the ongoing research which investigates the role of the functional traits of plants in habitat restoration, and the broader, long-term dynamics of Japanese knotweed invasion in field conditions.

Sophie and Ian concluded by claiming that the work will create a better, more scientifically informed framework for habitat restoration and give a clearer picture of Japanese knotweed dynamics and the habitat legacy effects of invasive species dominance.

From Crown to Underground

ICL’s Henry Bechelet and Dr Gareth Bruce from Advanced Invasives firstly discussed how stump treatment can be extremely effective as the distance the herbicide has to travel to reach the underground rhizome — the target of all herbicide treatments — is dramatically shortened.

Commenting at the event, Ian Graham said: “We feel that this is one of the first steps in what will be a very long process in establishing facts relating to invasive weeds and we look forward to inviting guests back to the site and ensuring the work started continues.”

Professor John Moverley OBE, Chairman of the Amenity Forum commented: “Today has been very interesting. The control of Japanese Knotweed is a major issue. It’s been a great opportunity to see first-hand different approaches and some of the complexities that are involved in this level of control.”

Tony Saunders, Area Manager for JSD Rail, said: “I found the day very insightful. It introduced some new ideas that we don’t necessarily come across on the railway as we are not looking at remediating the land; we are looking at removing Japanese Knotweed. There are a number of processes that are being trialled here which added to the knowledge we have learned we are able to take back with us.”

The ICL Continue to Learn Scholarship 2019

Sherriff the root to success at Milford GC