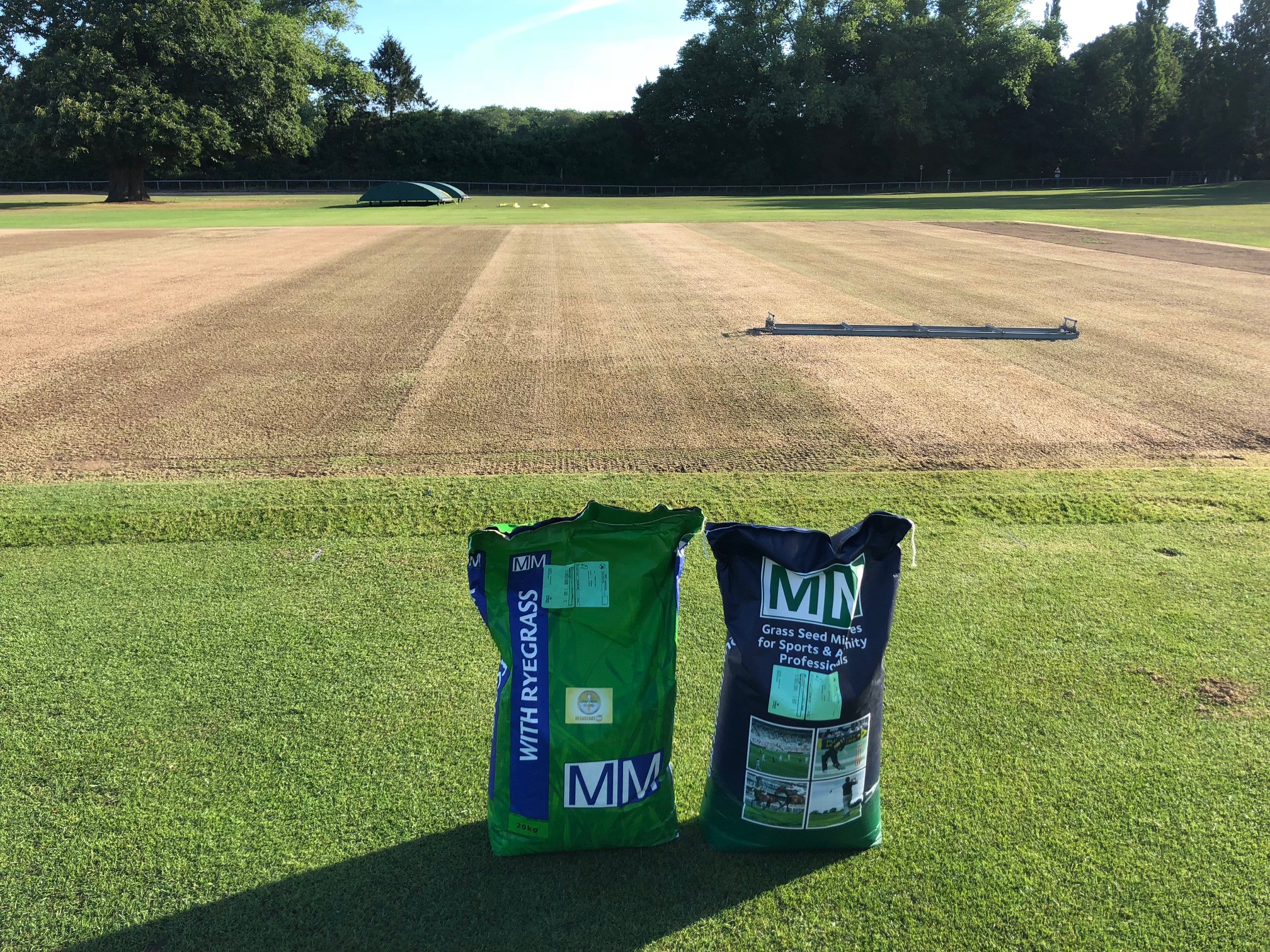 After a recommendation from his father Keith, Alex Exton, head groundsman at Witham Hall in Lincolnshire, claims he has not looked back since using a range of MM grass seed from Limagrain UK.

Keith Exton has enjoyed a long and prosperous career in the turf industry and Alex, long inspired by his dad, is now carving his own successful path in the industry. However, he admits that he would be foolish to not soak up some of the wisdom Keith has accumulated over the years.

“I first heard about Limagrain through my father who is a big fan of them,” said Alex. “He’s been quite successful within the industry and I suppose I have just tried to follow in his footsteps.

“I know he used Limagrain when he was at Oakham School for 16 years or so and then continued to use them when he went to Glamorgan County Cricket Club.  ​He is now at Grantham CC and is still using MM50 and Action Replay to this day”.

Alex is entering his ninth year at the prestigious Witham Hall which is a thriving boarding and day school for boys and girls aged 4-13 years. The school is committed to providing a first-class education both in and beyond the classroom and sport is a fundamental part of the curriculum – which is where Alex comes in.

The children can enjoy the major team sports of rugby, football, hockey, cricket, netball and rounders, and Alex alongside two other members of staff, maintain the fabulous sports pitches, grounds and facilities all year round.

Alex has a busy schedule which sees a tight turnaround in transforming the pitches for the relevant sports in between terms. As you can imagine, the playing fields experience an incredibly high amount of usage all year round but Alex claims that his use of Limagrain grass seed helps the turf to withstand such high wear.

Throughout his tenure at Witham Hall, he has relied on Limagrain’s MM50 for the cricket squares and Action Replay for all of the outfields which includes the rugby, hockey and football pitches.

MM is one of the most respected brands in the UK sportsturf and amenity industries and is relied upon at top sports grounds throughout the UK and beyond. In particular, MM50 is ideal for cricket squares and outfields. This hard-wearing mix has rapid germination, very fine leaved appearance, high shoot density and is tolerant to very close mowing, along with high disease resistance. All these attributes together produce a fantastic sward that has great colour all year round

Limagrain’s Action Replay belongs to the company’s Designer range of amenity grass seed and is an excellent mixture to use when renovating winter sports pitches. It will establish very quickly producing a dense, hard wearing sward for all heavy-duty sports areas.

According to Alex, both of these products provide him with everything he is looking for in a grass seed.

“We try to put Action Replay down in the spring and autumn as part of our renovations. I have just recently purchased a disc seeder so I tend to put it down between 20-25g/m2.

“On the cricket square it all depends on what I’m doing. If I have cleaned a track out in the playing season and want to reuse it, I will groove out and apply the product with the pedestrian push spreader. When I’m over-seeding the whole square, as part of our end of season renovations, I must admit that I put plenty on. I will normally apply two bags with the pedestrian spreader, to fall into the grooves made by the scarifier and then I will go over it in four directions with our SISIS Variseeder, again with another two bags.

“I know it sounds a lot but our square is on a slope, so when watering, the water can run and take a fair bit of seed with it. I just think that doing it this way works really well for our site and I get a fantastic take and coverage.

“The MM50 is excellent for the cricket – it stands the sort mowing, the heavy rolling and recovers incredibly well. In fact, both products perform consistently well and I never have any bad results or problems. It’s as simple as that really – they are good solid products.

“If I’m ever asked what seed I use, I only ever say Limagrain and I would recommend MM50 and Action Replay to anyone.”

Etesia celebrates 30 years in the UK

Sherriff Amenity Seminar and Demonstrations Get Seal of Approval