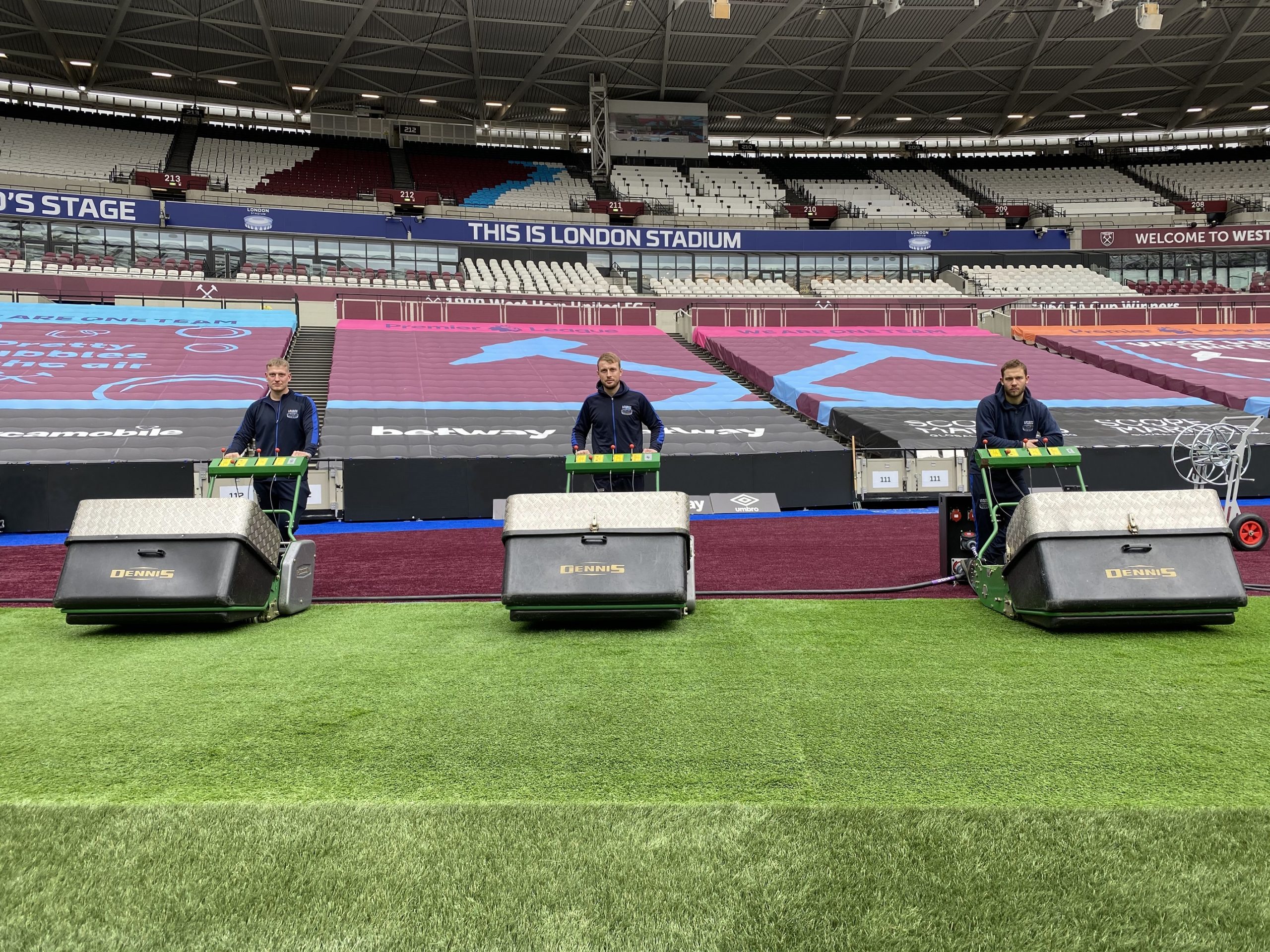 The London Stadium has recently increased its fleet of Dennis G860 cylinder mowers, and Head Groundsman James Williams has revealed exactly why.

James is an ambitious young groundsman and his prominent position at the London Stadium certainly is testament to this. The Welshman is about to embark on his fourth year in the role and understandably, he believes that 2020 has been the most challenging yet – but not for the reasons you might think.

“It’s been a difficult year due to the pandemic,” he said. “The worst thing is waking up in the morning on a matchday and there’s just no spark because you know there will be no fans to showcase your pitch to.”

James obviously takes great pride in his work; he is hard-working, committed and works round the clock to ensure that the pitch is in the best possible condition. Anywhere he can make improvements he will strive to do so – and therefore when an opportunity presented itself, James was quick to seize it.

“When football started again, the Premier League announced that we have to prepare the pitch and leave it well alone five hours before kick-off – it used to be three,” said James.

“This would mean starting a lot earlier and so my CEO asked me if there was anything I needed which could help. Straight away, I told him that two more Dennis G860’s would be nice!”

The London Stadium already had three Dennis G860’s in its armoury when James arrived, and he was pleased to see a familiar mower – one which he had become accustomed to for many years previously.

“I used the G860’s the whole time I was at Swansea City FC,” he said. “I’m just extremely comfortable with them – they are reliable, adaptable and they get the job done to the high standard I expect.”

James isn’t the only groundsman to be of this opinion as many of his peers have long relied on the G860 to provide the perfect cut for sports turf. Lightweight at just 166kg; it is easy to manoeuvre and comfortable to operate.

“The G860’s are normally brought out towards the end of the week once the pitch has been repaired to make sure that it is in the best shape going into a matchday.

“When the grass gets too thick, or if it’s dying off, we will use the verticutting cassette to clear that out – just to stop it from causing any thatch or disease. We probably verticut once a month as well as use the brush – both help to keep the pitch nice and healthy.

“The 8 bladed cutting cylinder always offers a fantastic finish,” continued James. “I like to cut down to 23mm for matchdays but if there is period when we’ve got a lot of games and training sessions on the pitch then I’ll take it up to 26mm for extra protection and coverage.”

The Dennis G860 was an instant hit when it was first developed and over the years it has proven to be one of the most popular sports turf mowers on the market. There is a reason behind its success according to James.

“Do you know what I like about the G860? It’s the fact that it hasn’t changed a lot. Dennis as a company has evolved with some other great machinery but the G860 doesn’t need to. Why would you evolve something that doesn’t need fixing? You can’t improve perfection.”

Evolution is the solution at Hazlegrove Preparatory School
Scroll to top