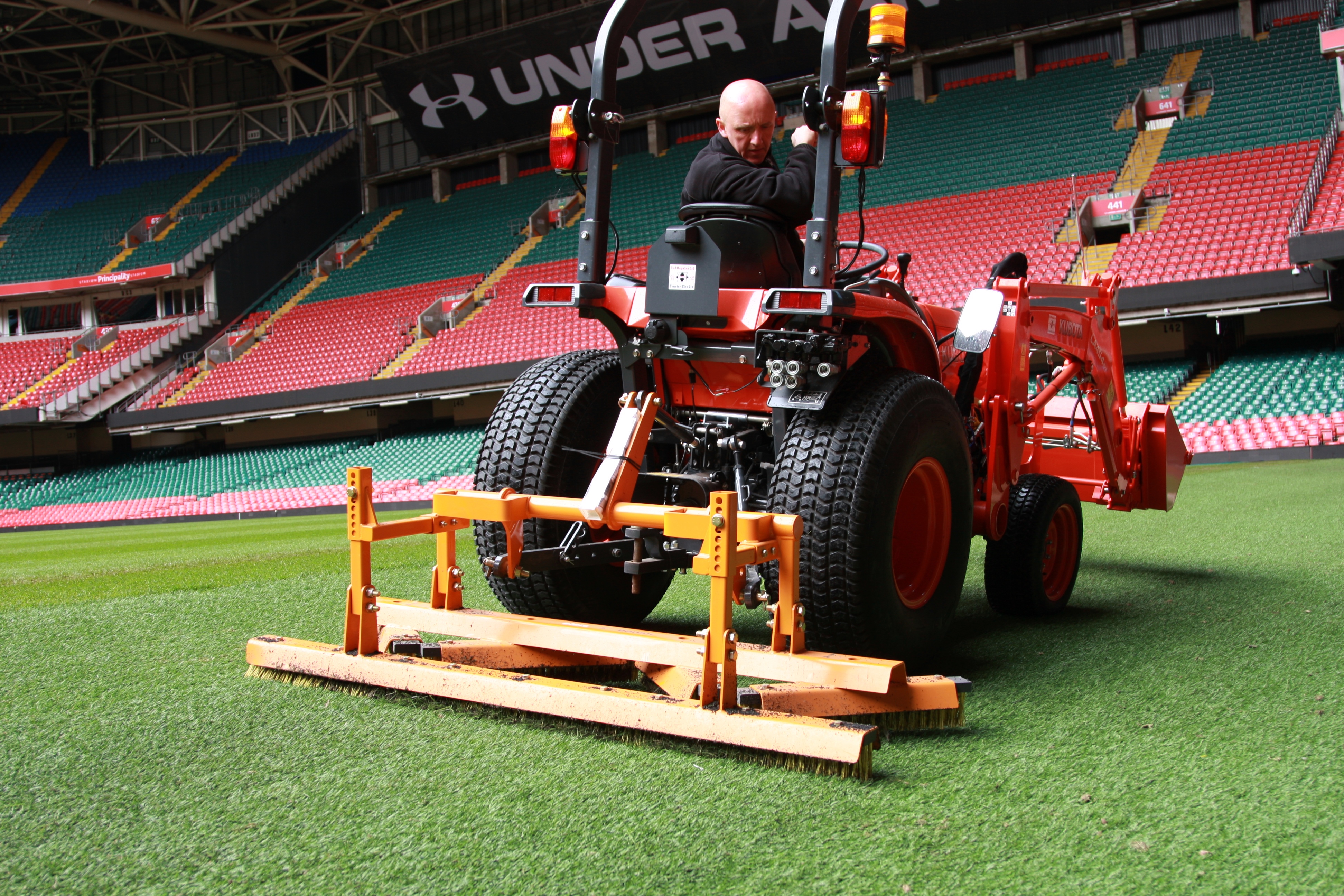 When Cardiff’s Principality Stadium installed a 3G synthetic surface to the surround of the pitch, head groundsman Lee Evans knew there was only one company he would turn to when it came to maintaining the surface.

Lee’s journey to what he calls his ‘dream job’ has seen him managing sports turf throughout his whole career.

After gaining his necessary qualifications, he entered the industry by maintaining sports pitches at a number of schools in the South East of England.

He soon landed his first role in a stadium environment when he was offered a job at Fulham FC, which then led to a position at Aston Villa FC.

Twelve years ago, Lee got the opportunity to return to his native Wales when he was offered the head groundsman’s role at, what it was then called – the Millennium Stadium.

In his time here, Lee became the youngest ever head groundsman to prepare a pitch for an FA Cup final and is already relishing the task of hosting the 2017 Champions League final at the Principality Stadium.

UEFA’s decision to select the Principality Stadium as the venue to host the final of one of sport’s most prestigious competitions, is testament to the great work undertaken by Lee and his team.

In fact, the Principality Stadium is taking great strides in being counted among the most elite and modern stadiums in the world.

Sporting the first fully-retractable roof in the UK, the venue is at the leading edge as a multi-purpose, multi-faceted event venue.

The installation of a partition drape system in July 2005 means that the bowl of the Principality Stadium can be used for multiple concert mode configurations and for staging exhibitions.

The summer of 2015 also saw a brand new Desso pitch installed along with a 4.5 metre wide synthetic surface all the way around the pitch.

“When the synthetic surface was installed we needed a machine to maintain it. I didn’t look at anything else – SISIS are well known in the industry and they manufacture reliable machines.

I’ve used SISIS before for different things: when we needed a one-off piece of kit to solve a problem we were having, they even tailor-built a machine to meet our requirements,” said Lee.

He decided that the SISIS Z Brush, also known as the SISIS Zig Zag Brush, would be the ideal piece of equipment.

Available in 6ft or 8ft widths, these unique brushing units consist of four or five 2ft long brush sections, mounted on a main frame so that each brush is operating at an angle to the forward motion of the towing vehicle.

This type of brushing has been found to improve the movement of top dressing material down to the base of the grass sward, with very few passes.

Alternatively, and in Lee’s case, the Z Brush also is perfect for ‘working in’ the rubber crumb on synthetic surfaces.

“We use the Z brush and it keeps the synthetic surface in pristine condition.

We use it once a week and the best feature is that it moves the rubber crumb around and it stands the fibres back up excellently.

“For me, the SISIS Z Brush certainly ticks all of our boxes.”

Dennis and SISIS at BTME 2014 – Built to Perform

SISIS Flexi400 Proves To Be Main Attraction at GIS 2015

Fantastic fairways from the SISIS Flexibrush