Sean Kauffman, Head Groundskeeper for National Football League (NFL) side Baltimore Ravens has revealed how two Dennis G860 cylinder mowers have significantly helped the grounds crew to improve the standards of the pitch at the M&T Bank Stadium.

M&T Bank Stadium is a multi-purpose football stadium located in Baltimore, Maryland. It is the home of the Baltimore Ravens of the NFL, and Sean has been working for the organisation for seventeen years. 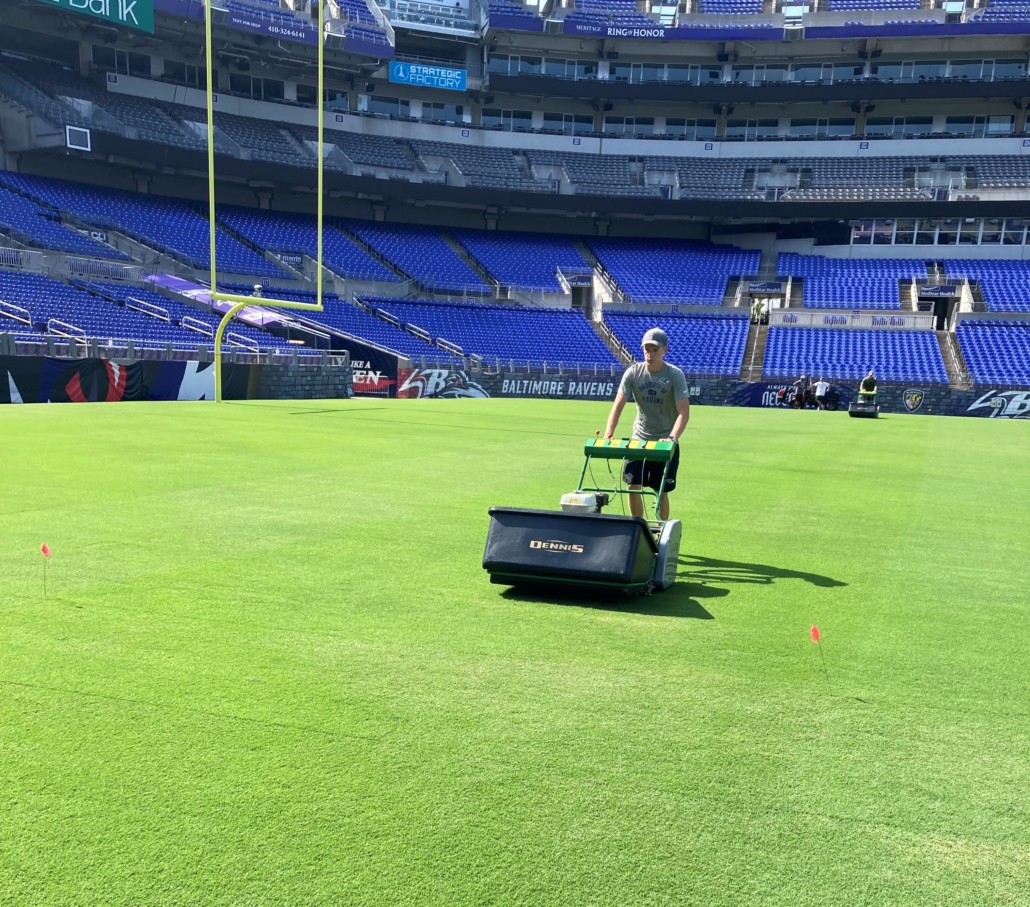 After originally starting as a First Assistant, Sean finds himself in the top position overseeing a busy schedule.

“In the average season we generally have twelve NFL games and training sessions,” he said. “On top of that we put on concerts, events, soccer games, NCAA college football, lacrosse and monster truck shows.”

It is safe to say that Sean and his two members of staff have their work cut out and so therefore he admits to always being on the lookout for equipment that can make his maintenance programme easier and better.

“We were previously using a ride-on mower on the stadium pitch, but I felt this was certainly one area where we could upgrade.

“I first saw Dennis Mowers at the Golf Industry Show (GIS), and we got a good look at the machines. We felt the G860 cylinder mowers would be a better option than what we had and knew that it would certainly help to keep some weight off the pitch.

“A demonstration was arranged, and we really liked what we saw. I also spoke to some people who had worked with the G860’s and they encouraged the purchase. We ended up purchasing two.”

Sports turf managers have relied on the G860 to provide the perfect cut; and the popularity of the machines in the States is growing all the time. Lightweight at just 166kg; it is easy to manoeuvre and comfortable to operate. The handlebar console houses the controls for – throttle, parking brake, roller drive and cutting cylinder drive.

The mower features a large diameter front roller with an adjustable scraper which has been designed for a precise height of cut control, giving an excellent finish on every occasion. The Dennis G860 also features an interchangeable cassette system to assist with a wide range of tasks such as including cutting, de-thatching, verticutting, brushing, spiking, and slitting.

Sean revealed that the spring tine cassette and the 8 bladed cutting cassette are the two that he most relies on.

“As one game ends, preparation for the next one begins immediately and this is where the G860 comes in,” he said. “Following games, both of the Dennis mowers will give the pitch a sweep to clean the debris off and then we will repeat the process a couple of days later.

Then we’ll use the 8 bladed cutting cassette to mow the pitch to prepare for matchday. We absolutely love the quality of cut and the presentation it offers. I also like how easy they are to manoeuvre; and it is very easy to switch the cassettes around.

“Our pitch has been better since using them,” continued Sean. “Everything has been great; the machines have been running brilliantly and hopefully that continues for a long time.”

SISIS Veemo hits the spot at Stourbridge
Scroll to top