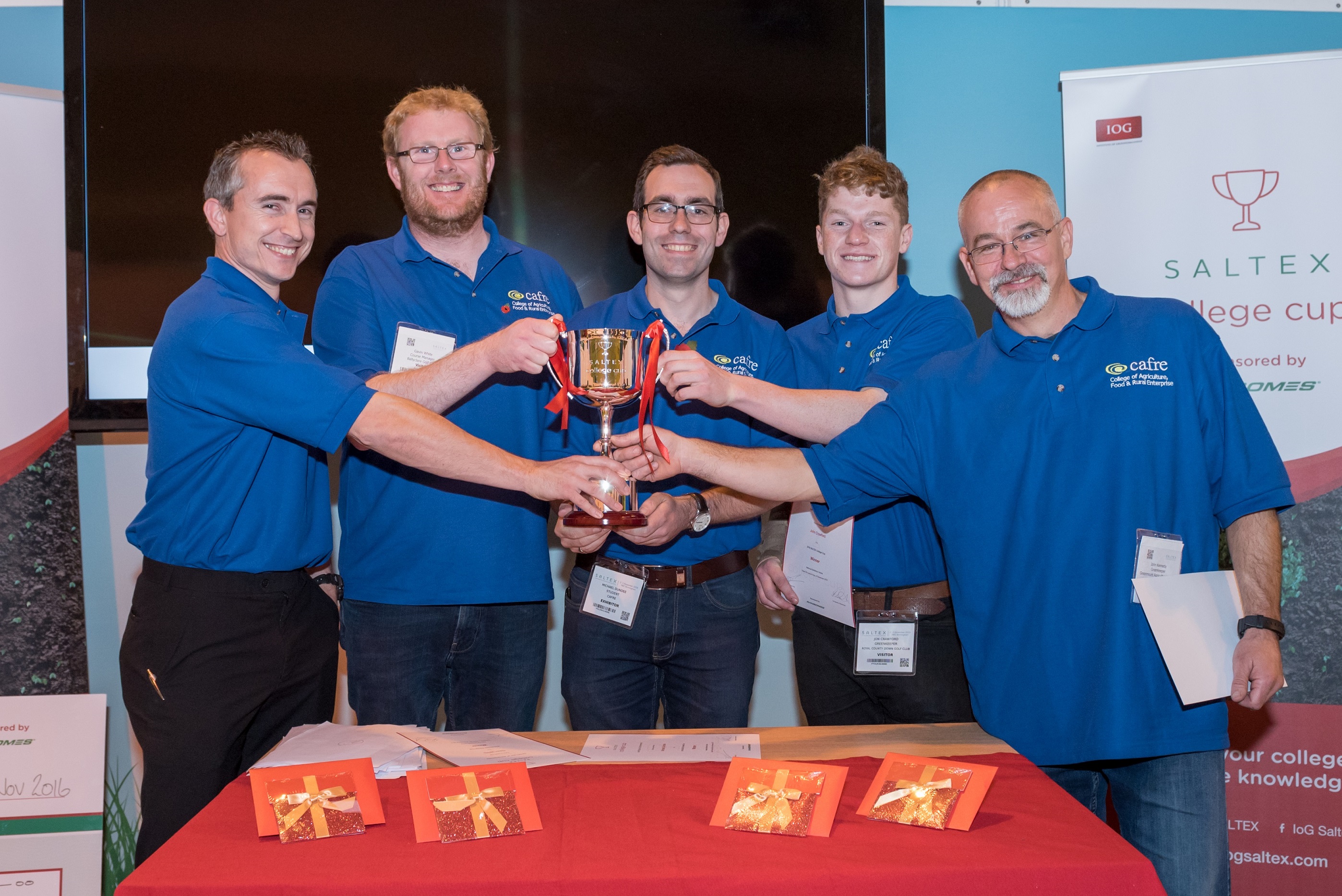 With five colleges participating, the competitive event highlighted that the industry is certainly in more than capable hands.

SALTEX 2016 yet again proved to be a place of opportunity. With a multitude of new show features, visitors made the most of SALTEX’s Ask the Expert feature where they gained free personalised turf advice; Pathology and Soil Science LIVE was an ideal opportunity for visitors to bring in problematic soil profiles to discuss with leading turf experts; and aspiring groundsmen went in their droves to the Young Groundsmen’s Conference to see how they could further their career.

The SALTEX College Cup was another unique new feature to come to the exhibition and by all accounts it was a resounding success.

The students were also presented with live test samples in which they had to identify potential threats to the health of turf.

The teams put pen to paper knowing that the winning college would not only get their hands on the SALTEX College Cup, but also ‘big’ cheque, a cash prize AND work experience at Wembley Stadium in the run up to next year’s 2017 FA Cup and FA Trophy tournaments.

However, only one team could emerge victorious and CAFRE made history by ensuring that the Northern Ireland based college was the first to have its name engraved on the trophy.

“We were delighted to take part in the SALTEX College Cup. As a College who run Sports Turf Programmes at Level II, III and IV it was very beneficial for our students and their colleagues to see what skills the Industry valued and expected of those about to embark in career in groundsmanship. Also the competition gave CAFRE a means of bench marking the quality and content of our programme delivery relative to our peer colleges throughout the UK.

“Winning the Competition has boosted morale of staff and students alike and given them confidence to enter this and other similar competitions in the future. Additionally, there has been a great amount of media interest locally with the groundsmen being the focus of attention rather than the professional sports personalities they service. The unique nature of the prize at Wembley has also wetted the appetite of would- be participants for next year – as one member of the winning team put it “it’s a prize that money can`t buy and something that will live long in the memory.”

“CAFRE sees the competition as a unique opportunity to show case our student skills to the industry and equally a chance for the industry to show the standards expected from those leaving training  and entering the work-place. There is no question CAFRE will be back next year to defend the title – the list of volunteers to take part is growing daily.”

Karen Proctor, marketing and communications manager- International at Ransomes, was also upbeat about the future of the competition:

“The competition was a huge success. It was a fiercely contested battle between the teams, but in the end, the College of Agriculture, Food and Rural Enterprise from Northern Ireland were worthy winners. Ransomes were delighted to be able to sponsor this fantastic initiative; it is crucial to invest in education and professional development to ensure that the turf industry continues to thrive. We hope there are many more SALTEX College Cup competitions in the years to come, and we look forward to being a part of that.”

“I am extremely pleased with the competition. It was always meant to be a test of academic knowledge for the students with the aim of raising awareness of the technical knowledge that turf managers are expected to have now. The feedback from the judges is that the industry is no doubt in safe hands in the years to come but we need to improve our young turf managers all round skills set, something that the IOG is currently working on with a broader range of education offering. I believe the competition will grow next year as now the colleges that have not taken part have seen what they have missed, to get student turf managers on a bigger stage.”

SALTEX 2017 will be held at the NEC, Birmingham on 1 and 2 November 2017. For more information visit www.iogsaltex.com

Bookings Flood in for SALTEX 2015

Your Industry – Your Show – Your Voice