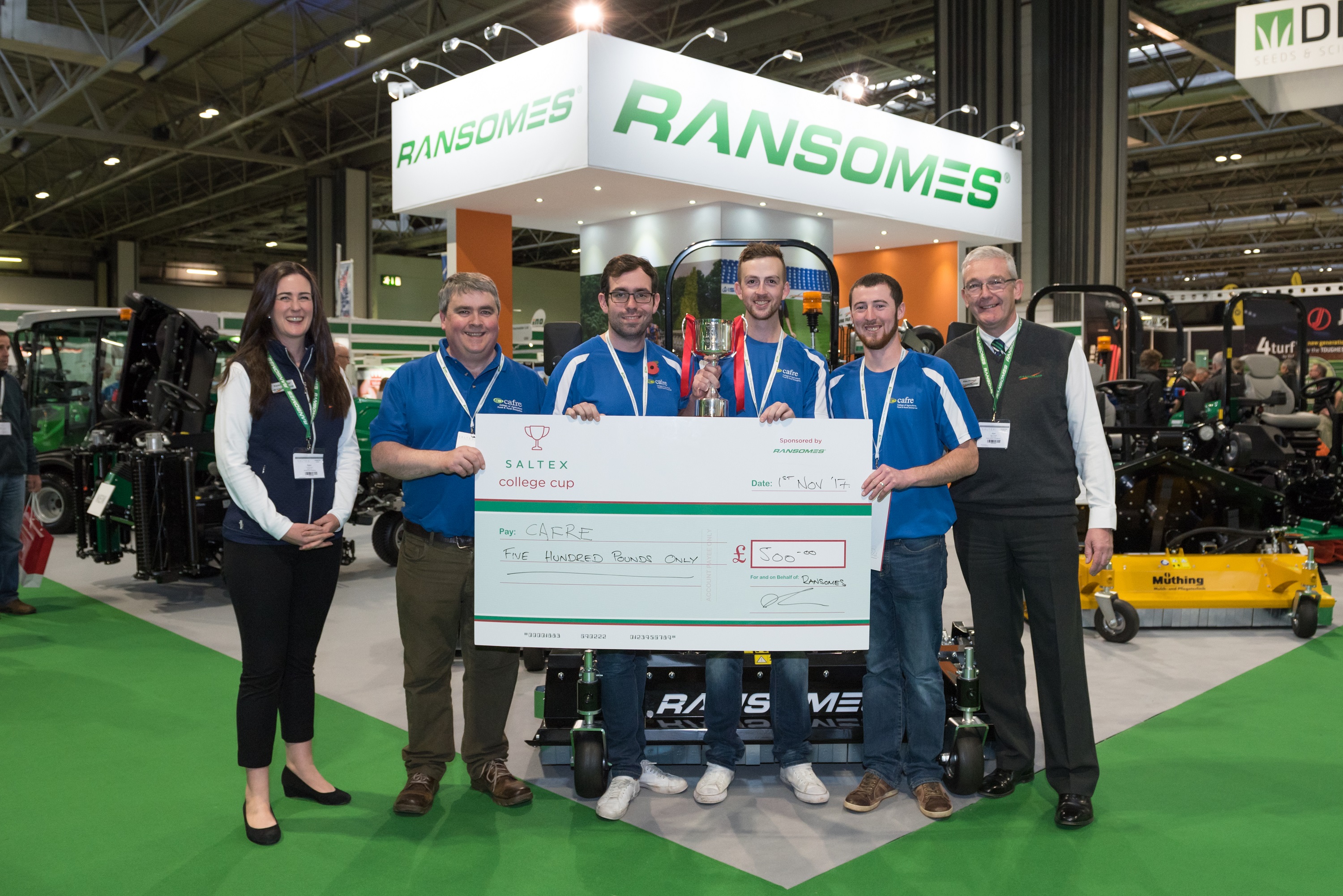 SALTEX College Cup Signals a Bright Future. The SALTEX College Cup, sponsored by Ransomes, is a national student-led sports-turf challenge. It is an academic test of turf management knowledge for student competitors who are enrolled at colleges throughout the UK on relevant courses of study.

Askham Bryan College, Bridgwater & Taunton College, Myerscough College and, last year’s winners, the College of Agriculture, Food and Rural Enterprise (CAFRE) Greenmount Campus competed for a chance to have its name engraved on the trophy in support of their respective turf programmes.

In teams of four, the colleges embarked on the two-hour competition consisting of paper-based multiple choice and short answer questions on turf management, plus a case study which required a more in-depth written answer. The students were also presented with live test samples in which they had to identify potential threats to the health of turf.

CAFRE, from Northern Ireland, claimed the top prize for the second year running although Askham Bryan were only one point behind in what was a closely fought competition between all of the colleges. CAFRE was awarded the trophy, a £500 cheque for the college’s turf department, and each student received a £50 Amazon voucher. The team was also presented with a prize that money can’t buy – the chance to get involved with pitch preparation at the 6 Nations, Scotland vs England, at BT Murrayfield Stadium.

Results were announced on the first day of SALTEX and CAFRE’s senior tutor, Paul Campbell, revealed his delight at picking up the trophy for a second successive year.

“A combination of excitement and disbelief ensued among the squad as they emulated the achievement of 2016 – particularly for team captain and rugby fan Michael Dundee as he realised he was on his way to BT Murrayfield – and he didn’t need a ticket!

Paul continued: “CAFRE staff and students fully support the concept of the SALTEX College Cup – it provides a forum for showcasing and acknowledging the skills of young people making a career in the industry and allows college staff to benchmark how their programmes are performing against other specialist colleges in the UK. The excellent organisation of the event, the generous sponsorship and the once-in-a-lifetime experience afforded to the winners will mean healthy competition for next year`s team and guarantees CAFRE will return to defend the title in 2018.”

Commenting on the sponsorship of the 2017 SALTEX College Cup, Ransomes senior director Alan Prickett said: “The SALTEX College Cup was another success this year, and we were delighted to have sponsored it for the second year running. Ransomes has a commitment to educating the next generation of groundscare professionals, and we aim to support this in a variety of different ways, including sponsoring the SALTEX College Cup competition. CAFRE, based in Northern Ireland were deserved winners again this year.

Congratulations to CAFRE and we look forward to seeing if the college can retain its title for a third time next year!”

Amenity Sprayer Operator of the Year 2017
Scroll to top