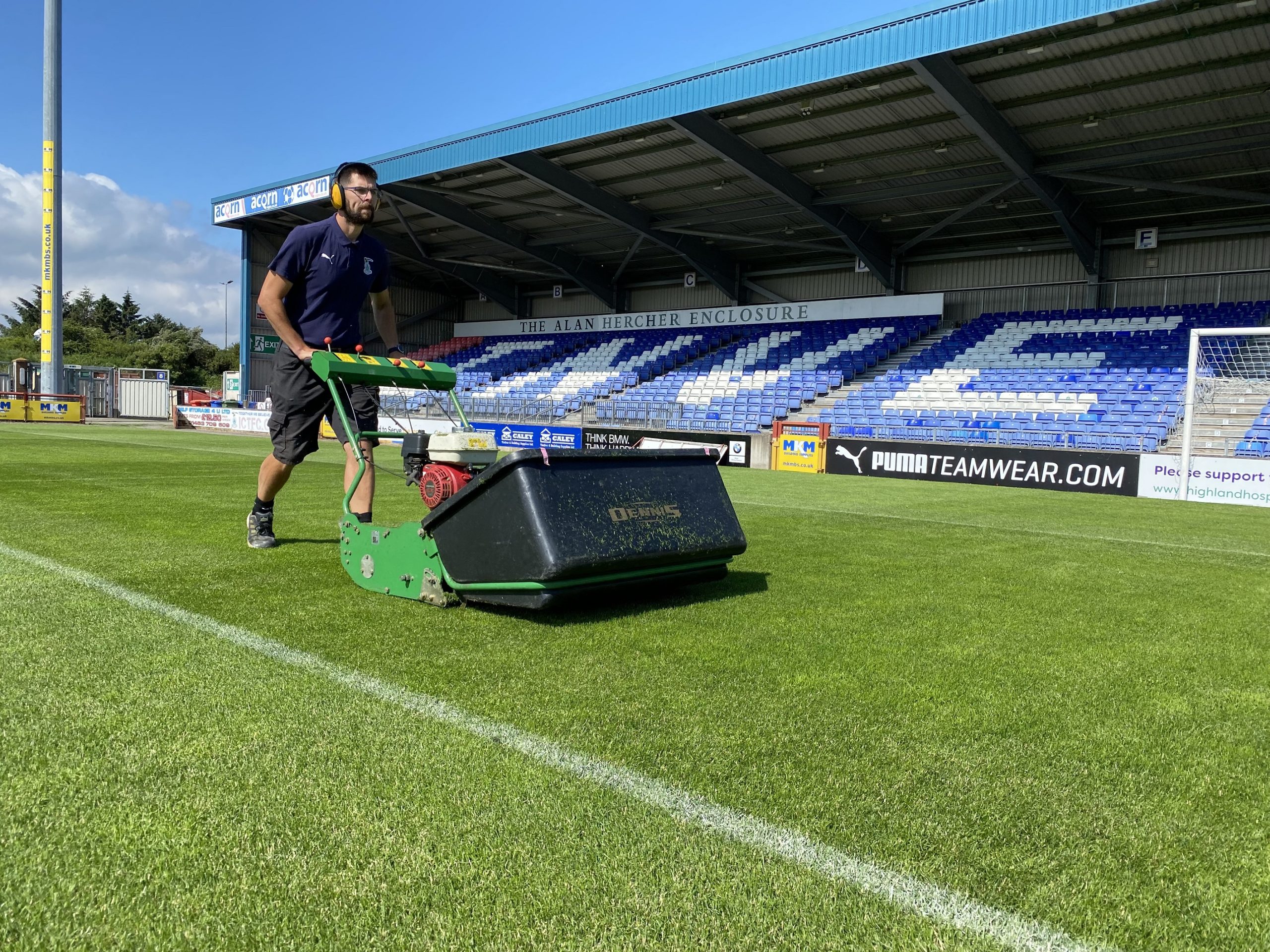 Inverness Caledonian Thistle FC has said goodbye to its trusty 19-year-old Dennis cylinder mower and welcomed a new G860 as its replacement.

“If you can have a mower that is 19 years old, and it still gives you that kind of cut and presentation – then just imagine what a newer model will do!”

Head Groundsman Dale Stephen admits that it did not take much to convince Scot Gardiner, the CEO to buy a new Dennis G860 – he simply had to look at the job his old one was doing. However, it could have been a quite different story and Dale admits that he was somewhat guilty of judging a book by its cover.

“When I first joined, I went into the tractor shed and looked at what machines and equipment I had to work with,” he said.

“There were only a handful of machines and there was this old Dennis G860 in the corner. The old groundsman at the time told me that it would be the best and most reliable mower, but I must admit, looking at how old it was, I thought he was joking.

“How wrong I was. From the first time I cut with it, I was hooked and wanted to use it all the time.”

Up until joining Inverness Caledonian Thistle, Dale had been a greenkeeper for the entirety of his career. He claims that moving over to the football side of grounds management was always part of his plan and was delighted when he was given the opportunity at Caley Thistle five years ago. It did not take him long to adapt and since joining the club, the pitch at the Tulloch Caledonian Stadium has frequently been held in high regard.

“People ask me how I produce a pitch like that,” said Dale. “But I think it can be as easy or as difficult as you want to make it. If you do the basics and do them well, then you are giving yourself a good platform to have the best surface you can. The right products and the right equipment will certainly bring out the best of the pitch.”

That is where the Dennis G860 cylinder mower comes in. Relied upon at world class stadia and major tournaments, the G860 is one of the most renowned cylinder mowers in the grounds management industry. Lightweight at just 166kg it is incredibly easy to manoeuvre and comfortable to operate. The handlebar console houses the controls for the throttle, parking brake, roller drive and cutting cylinder drive.

Dale has no doubt that his 19-year-old G860 could have continued cutting and preparing the pitch at the stadium but the perfectionist in him wanted a newer model. “I told the CEO (Scot Gardiner) that if we got a new G860 then it would be a good investment because it will more than likely outlast me!” he said.

Dale’s wish was granted, and it was not long before he was the proud owner of a shiny new Dennis G860.

“The main difference between the new one and the old one is that I have an 8 bladed cylinder now and I have really seen an improvement. The finish is second to none and the sward has really thickened since using it.

“It is nice and light so you can use it anytime of the year without worrying about putting weight on the pitch. In my opinion, it is the ultimate mower for matchday preparation.”

While his new G860 may well be his new go-to machine, Dale revealed that his old Dennis G860 will not be retiring just yet.

“The old G860 is now at the youth training centre, and it’s still going strong. I’m sure it will do just as good a job on those pitches as it has done for me.”

Coombe Wood GC is the ‘best in decades’
Scroll to top