Alan Ferguson, Head Groundsman at St George’s Park – the FA’s National Football Centre, has chosen Dennis as a key supplier of maintenance equipment for use on the natural elite pitches.

The award winning groundsman purchased three Dennis G860’s complete with interchangeable cassettes, meaning that his groundstaff can complete a multitude of tasks including verticutting, brushing, rolling and scarifying. Three Dennis Premier models complete the line-up of pedestrian mowers that Alan and his team will use to keep the 330 acre park in pristine condition. 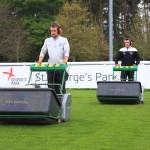 Located in the heart of England, near Burton-Upon-Trent, St. George’s Park is the home of the National Football Centre. After going through a process of segregating the main pitches, Alan and his team were looking to build up a fleet of quality pedestrian mowers to look after the elite level pitches: “The Dennis range gives us the flexibility to work with interchangeable cassettes. To have one machine that can deliver 5 or 6 different surface functions is excellent for us.” said Alan.

Built on the FT principle and with a cutting width of 34”, the Dennis G860 professional mower has an interchangeable cassette system, with one minute changeover, giving options to fit 6 different types of heads including scarifiers, verticutters, brushes, spikers, and slitters as well as 6 or 8 bladed cutter cassettes and are used in high class arenas around the world.

Fitted with a powerful Kubota petrol or diesel engine, the Dennis Premier is available in 30” and 36” cutting widths. A 3 section rear roller and steering brakes make it easy to manoeuvre giving an excellent stripe pattern and rolling characteristics. Complete with a large diameter front roller with adjustable scraper, for precise height of cut control, the machine is easy to adjust on both sides with the use of a single spanner.

Seven-time Groundsman of the Year during twelve seasons at his previous job at Ipswich Town FC, Alan has worked with every mower available. “I always felt that Dennis stole a march on other pedestrians. Going back into the early 1990’s when the first cassette model was launched I felt it was a fantastic machine. It just made perfect sense to have the flexibility of working with a series of cassettes when we were looking for a pedestrian mower. The weights of the machine are right. The quality of the Dennis range has always been exceptional and the results that we’ve had with them so far have been fantastic.”

When Alan became Head Groundsman at St George’s Park, it was important to work with key suppliers in the industry. It’s something that Alan had successfully implemented at Ipswich and after his switch to the FA centre; he wanted to bring the market leader for each maintenance task in. Alan sees each supplier as a specialist in their field and a good source of knowledge as and when required. “I have a very good working knowledge, but the expert tag comes from within these companies. I have these people on my advisory team so that I have the right council at different times of the year. It’s been hugely beneficial and it’s help put the project in a very good place,” explains Alan.

Why was Dennis chosen as a key supplier? Alan felt that it was an easy decision and described the Dennis pedestrian turf mowers as the market leader in terms of ease of use for the operator and the overall weights of each machine which are very low. “With the Dennis G860 range, it was the flexibility of operation. We had a desire to mow the elite pitches on a pedestrian programme, so it was a no-brainer that Dennis would be the supplier of that because the quality was there. A number of other top venues around the world were already using Dennis. I know most of the head groundsmen at these venues, so I spoke to the guys to find out how they were getting on with them. With us being the English FA, it was also a good fit that Dennis is a British Engineered product.”

Based just twenty miles away from the Dennis factory is a real bonus for Alan and is testament to the excellent service he has received from both the manufacturer and also his dealer, Campey Turfcare. All groundstaff have been to the factory and undergone bespoke training with the Dennis service staff which Alan says his team are already seeing the benefits of.