Dennis and SISIS confirm attendance at the Australian Turfgrass Conference and Trade Exhibition.

Following a successful appearance at last year’s Australian Turfgrass Conference and Trade Exhibition, Dennis and SISIS has announced they will be returning to exhibit once again.

The Conference and Trade Exhibition, takes place at the Crowne Plaza in the heart of the Hunter Valley from 21-26 June, the exhibition provides a great opportunity to see the latest innovations and products available in the industry. 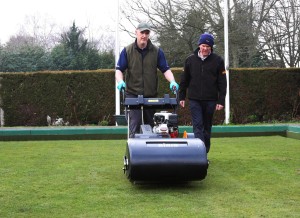 Dennis and SISIS flew the flag for Britain at last year’s event with the SISIS Veemo tractor mounted scarifier proving to be the star attraction. This year the impressive SISIS Auto Rotorake Mk. 5 is set to be the star of the show.

The Mk. 5 is a self-propelled heavy duty scarifier and de-thatcher for removal and control of thatch on fine and other quality turf. Its versatility ensures that it can be used on a number of surfaces including bowling greens, croquet lawns, tennis courts, cricket pitches, golf courses and lawns and gardens.

Used worldwide, the Auto Rotorake performs all year round on fine turf; typically undertaking an aggressive role before and after the playing season and is more lightly used throughout the growing season. Its range of interchangeable reels consisting of thatch removal, thatch control and a range of brush reels for both natural and synthetic turf means that it can be used for several different tasks including de-thatching, verticutting and brushing.

Speaking ahead of the company’s return to Australia, Roger Moore – Sales and Marketing Manager for Dennis and SISIS said: “We had a very successful exhibition last year and are delighted to be returning. Australia is a good market for us and is growing all the time.”

Following the exhibition, the Dennis and SISIS team will be extending their tour of Australia by teaming up with their distributors in the states of Queensland and New South Wales to perform a number of demonstration days. The series of demonstrations will provide an excellent opportunity to see some of the most innovative golf maintenance products in action.

Dennis and SISIS can be found at Booth No 49.