Barclays Premier League side Crystal Palace has become the latest top flight club to purchase a Dennis G860 mower complete with a range of interchangeable cassettes for use at their Selhurst Park stadium.

The Eagle’s head groundsman, Mark Perrin, knows that if a home match isn’t televised live then it will certainly make an appearance in the MOTD highlights later that evening. And that is when he has good reason to value his long loyalty to Dennis and in particular the G860. 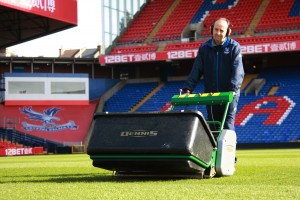 “I felt that Dennis were pioneers in the market. They were the first company to bring out an interchangeable cassette mower and the G860 is a machine I have always trusted for its sheer quality and reliability,” says Mark who has just purchased a new machine. “I’ve been using the G860 for the nine years I’ve been head groundsman here, so when it came to choosing a new one, there was only going to be one choice – it had to be another Dennis G860.”

Mark who oversees four other members of staff at both the stadium and training ground says that a key decision in purchasing the new machines was ease of use and manoeuvrability for both himself and his groundstaff added to the different cassettes available to carry out key seasonal tasks using just one power source.

“We have the Verti-Cutter cassette to deal with thatch and lateral growth, brush cassette and obviously cutting cassettes which we have two for each machine. This means that when one goes off to be re-ground, we always have one we can use; keeping down-time down to a minimum. We use the eight-bladed cutting cylinder in the lead up to a home match including on the day of the match because they give an excellent presentation. After the match we swap the cassette to the brush to sweep any divots or debris up before verti-cutting. The machines are so simple to use – I didn’t want to have a machine that was difficult to set-up and that only I could use.”

The Dennis G860 has six quick changeover cassette options giving ultimate flexibility and a single power unit for many day-to-day maintenance tasks. This versatility coupled with low ground pressure, at just 166kgs, and manoeuvrability makes the G860 the first choice for many top sporting venues around the world including World Cup Finals and European Championships.

“We have always had a great service from Dennis, whether it is sales or servicing machines,” he says. “From my own personal experience; I’ve always preferred the G860 and I wouldn’t hesitate to recommend it to any other groundsmen.”