The pitch at Harrogate Town’s CNG Stadium was always known for its difficult, even hazardous 2-metre slope, but has improved dramatically following extensive works by White Horse Contractors (Northern) to become one of the best in the Conference North. 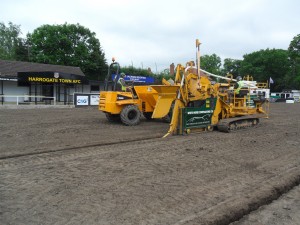 As the club celebrates its centenary this season and its highest league position yet, owner and chairman Irving Weaver calls the change a wonderfully pleasing and timely uplift. He puts the upturn in playing conditions down to the efforts and skill of contractors White Horse Contractors, who were brought in to complete pitch levelling and drainage operations in the most trying of conditions.

Funded substantially by a Football Foundation grant; it has been an 18 month long project that has been hampered by abnormal rainfall. Work on it began in the 2012 close season, which turned out to be the wettest summer for decades. One end of the pitch was cut, whilst the other filled to improve grades. After installation of cross-pitch drainage leading into existing manholes, sand amelioration, cultivations and seeding, the pitch was overwhelmed with rainwater.

Unable to dry off before the start of that season due to persistent rain fall, meant that secondary slit drains could not be installed. The Harrogate Town pitch, though now for the first time a level playing field, was then subjected to months of further exceptional rain, making playing conditions match by match very heavy.

“We had gained on the swings, but lost on the roundabouts you might say’, said Irving.”

“So much had been achieved for us by Jim Crabbe and the rest of the White Horse team, yet we were all cruelly denied getting the task wrapped up. Patience and tenacity were called for and White Horse Contractors along with everyone else at the club had that in spade-fulls.”

At the earliest opportunity last summer White Horse returned to the site to install traditional slit drains at 800mm spacing the length of the pitch. These were partially filled with drainage gravel and topped with sand. Great care was taken by White Horse to ensure that there was a good connection form these to the back fill over the previously installed pipe drains, essential for maximum, long-term drainage efficiency.

Overseeding in three directions followed using DLF’s Premier Pitch seed mix. Then the whole of the pitch was top-dressed with 100 tons of sand and Verti-drained.

Rigby Taylor’s Delta mix fertiliser was applied after the pitch work and ironically irrigation needed to make the most of last July and August’s warm growing conditions. As the sward developed it was dimple-seeded with a Hurrell and Maclean grass mix to boost density.

For the start of the 2013/14 season, again an excessively wet one, drainage has been superb and grass cover lush and consistent, the club reports. 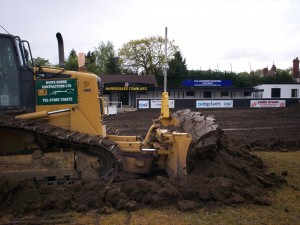 “White Horse battled with us through all the tribulations,” added Irving.

“When I look at our pitch now after this winter’s ravages and see how well it is playing and how marvellous it looks I realise the value of getting a contractor with the resources and dedication to see the job through. I’ve nothing but praise for them.”