The recent announcement that SALTEX (Sports Amenities Landscaping Trade Exhibition) will be moving from Windsor to the NEC Birmingham, has been met with enthusiastic support from both exhibitors and visitors. The new look SALTEX will take place on 4 and 5 November 2015.

The announcement has been well received by exhibitors, with close to 100 already committed to exhibiting at the 2015 event – which will incorporate a wide range of educational seminars and turf debates, the unique ‘Ask The Expert’ clinic, and for the first time, will combine with the IOG’s annual conference and awards. 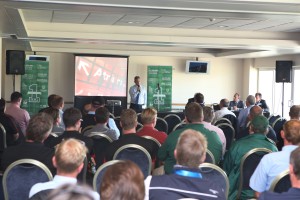 The move has also re-ignited interest for those who didn’t appear at this year’s show – the final one at Windsor Racecourse. Companies such as Indigrow, Vitax Amenity and Campey Turf Care Systems have already signed up to the 2015 event; explaining that a central location and a more convenient time of year for visitors were major reasons for their return.

“The move shows that the Institute of Groundsmanship (IOG) has really listened to the industry. Birmingham is a more central national location, which offers easier access for existing and potential SALTEX visitors – especially those who couldn’t travel down to Windsor. Vitax wholly supports the move,” said Mike King, sales and marketing manager for Vitax Amenity.

Mike’s views are echoed by Carl Crome, managing director of Indigrow: “I think this announcement will bring the UK turf exhibition into the 21st century. I’ve been attending the show since 1976, and welcome the idea of not having to contend with the outdoor elements. The transport links to the NEC are excellent, both for international and UK visitors. Given the location, SALTEX could now become the premier sports turf show for groundsmen and greenkeepers and rival the Golf Industry Show (GIS) in the USA.”

While Richard Campey, managing director of Campey Turf Care Systems said: “The move to the NEC is a positive one and we will be there in 2015.”

GreenMech, The British Agricultural and Garden Machinery Association (BAGMA), Dennis, SISIS, Schiller Grounds Care UK, Etesia, Lloyds of Letchworth and Complete Weed Control, were also among a whole host of exhibitors who are quick to publicly declare their support for the move:

“Relocating SALTEX to the NEC will provide exhibitors and visitors with excellent indoor facilities and transport links. The change in date opens up the event to more visitors including those groundcare professionals who previously couldn’t attend the show at Windsor in September due to work commitments,” said Roger Moore, customer manager at Dennis and SISIS.

“Judging by the more considered opinions at this year’s show it will be a positive move and one that suits the majority of the visitors who attend the show to buy equipment. The industry needs a show of this character as it is the last of its type in the UK. It needs to be supported by all and the sceptics need to adapt to the concept of a modern show in a central location in a controlled environment to ensure its future. Well done to the IOG for having the strength and conviction to make this historic move,” said Keith Christian, director of BAGMA.

Martin Lucas, sales director at GreenMech said: “SALTEX, over the past few years has become a regional event. The move to the NEC will open up a new audience for us that has never visited SALTEX before.”

While David Goose, managing director of Schiller Grounds Care UK commented: “Although the timing for us as a company might be the wrong time of year – it’s the perfect time for our customer – the visitor. The NEC is a better location than Windsor with better transport links. SALTEX 2015 is a show we have to be at.”

Social media channels and online forums were flooded with industry professionals who also welcomed the announcement:

“I think that the move to the NEC is a positive move for all concerned. There are a lot of people who cannot attend at present as they are in the middle of their end of season renovations. And being indoors you can guarantee being in the dry no matter what the weather. A very brave decision but one done for the best of reasons and I believe one that will pay dividends going forward,” said Keith Kent, RFU head groundsman at Twickenham Stadium.

“To bring together the trade show, the IOG Conference and Awards is a positive move that hopefully encourages more people in our industry to attend SALTEX and get involved,” said Neil Stubley, head groundsman at Wimbledon AELTC.

“As someone who lives just a stone’s throw from Windsor (Crowthorne), I think it is a great move. As for the date, that is fantastic news,” said Bryan Evans, head groundsman at Wellington College.

“The IOG SALTEX show offers so much for groundsmen and is certainly the best show in the UK for us. Moving the show to the NEC in Birmingham is a fantastic idea as I believe it’s more central and will offer more,” said Robert Bradshaw, head groundsman at One Leisure.

“Good idea. NEC is an excellent place for exhibitions. I have been many times and there is plenty of room and space for demonstrating very large pieces of kit such as 60ft high extrusion machines. It means you can visit the show without planning an overnight stay and it opens the show to a much wider audience,” said a subscriber on the Service Dealer website.

Speaking on behalf of the IOG Board, Geoff Webb, CEO of the IOG commented: ‘We are absolutely delighted with the support we have received following the announcement. It certainly wasn’t a decision that was made on a whim and is not a change for change sake. We passionately believe that our industry deserves a thriving trade show as its shop window to the world. We hope many will see the potential and, like us, take the opportunity to bring SALTEX into the 21st century.”

A new SALTEX, new venue and new date; the industry has spoken and it appears that SALTEX 2015 is already shaping up to be the unmissable event of the year.