Scottish Premiership football club Hibernian have become the latest top flight club to purchase a new Dennis G860 34” professional mower with a range of interchangeable cassettes for use at their Easter Road Stadium. 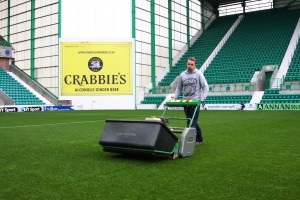 “I first saw the G860 when Alan Ronaldson, the Scottish Area Manager, gave a demonstration,” explained Colin. “I loved the machine and what it could offer with its range of different cassettes. As soon as I started here, I knew it was a Dennis that I wanted as it allows me to complete a range of different jobs.”

Purchased with a range of cassettes including an 8-blade cutting cylinder, tungsten tipped verti-cutter and brush allows Colin the flexibility to not just cut the Easter Road stadium pitch to a high standard with the ever present ‘Dennis Stripes’ effect, but also carry out key tasks after matches such as brushing and verti-cutting, which according to Colin doesn’t allow thatch or organic matter to build up on the pitch.

“The cutting and finish we get with these machines is absolutely tremendous. It is probably the best machine I have got in the fleet. I really enjoy using it because it’s so simple and quick to change the cassettes. It’s not just great before games for cutting but the brush cassette is also really good for tidying debris after games.”

The Dennis G860 has six quick changeover cassette options giving ultimate flexibility and a single power unit for many day-to-day maintenance tasks. This versatility coupled with low ground pressure, at just 166kgs, and manoeuvrability makes the G860 the first choice for many top sporting venues around the world including the World Cup Finals and European Championships.

“Anyone who has got a Dennis raves about them, so I’m really pleased now we have one. I can honestly say that I’ve fallen in love with it and I would definitely recommend Dennis to other groundsmen,” said Colin.

You can also view a video of Colin and his Dennis G860 mower by clicking here.