A number of industry professionals have started to show their support to SALTEX 2015 by embracing the new ‘GET READY TO LOVE SALTEX’ campaign.

2015 marks the exhibition’s 70th anniversary and as the UK’s biggest exhibition of groundsmanship products and services, SALTEX (4-5 November at NEC Birmingham) showcases a wide range of exhibitors from every sector and offers educational opportunities at every turn.
Over 230 exhibitors have now signed up to the exhibition and visitor registration is at an all-time high with three months still remaining until the show.

Overwhelmed by support from the industry, the SALTEX 2015 image – a heart formed of grass, has prompted industry professionals and volunteers to publicly show their support to the industry and SALTEX by forming a heart shape with their hands. 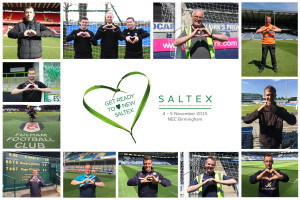 Commenting on his support for the show, John Ledwidge, head groundsman at Leicester City FC said: “For me, SALTEX is a show that I’ve always attended because it’s a great chance to meet other groundsmen and likeminded people. It’s especially good for those who are involved at grassroots level or are at clubs in lower leagues because they get the opportunity to ask questions to those who are working at the top.

“The Young Groundsmen’s Conference this year will also be great because it’s important to get the next generation in and find out about what the IOG are doing to ensure a good future for the industry.

“SALTEX is such a versatile show. It is a one-stop shop for all different sectors and shows ideas from people all over the country and across the world that can really help you in your career. It really offers something for everyone and it’s a fantastic representation of the industry we love,” he said.

The SALTEX HEART CAMPAIGN is now well underway and the Institute of Groundsmanship (IOG) is encouraging everyone to show their support by sharing photos of themselves forming the heart shape. Two FREE tickets to the IOG Industry Awards, which will be hosted on the evening of the first day of SALTEX (4 November), at the Hilton Metropole, Birmingham will be up for grabs for the best photo. This event is the UK’s biggest celebration in groundsmanship; with 19 awards, Alistair McGowan providing the after dinner entertainment and talkSPORT’s Mark Saggers hosting the event. The prize also includes a three course dinner, complimentary drinks and accommodation for the night.

What’s more, the halls of SALTEX 2015 will be decorated with the pictures of those who send in their pictures. So if you love the industry you work in and would support SALTEX 2015’s move to a new location and new date then send your pictures via twitter to @IOG_SALTEX, Facebook – www.facebook.com/IOGSALTEX or by email to the SALTEX Press Office – chris.bennnett@fusion-media.eu

SALTEX is for absolutely everybody within the groundcare industry, so no matter what your position, your sector or your age – send your pictures in!
Visitor registration to SALTEX 2015 is free. To confirm your attendance visit www.iogsaltex.com