Colfe’s school, which is one of London’s oldest school’s dating back to 1574, has become the latest SISIS customer to invest in dedicated machinery with the purchase of a SISIS Brush-Pro ride-on brushing system for all regular synthetic surface maintenance.

Brian Atkins, who has been grounds manager at the school for the past ten years, has been an avid user of SISIS equipment for close to twenty years. When it came to replace an old SISIS Robbi triple brush that the school had used for eight years, he visited the company stand at IOG SALTEX in September 2013 to purchase the newer enhanced Brush-Pro model.

“We’ve got a range of SISIS machines from slitters, scarifiers and sweepers to the machine we use on the synthetic surface, which we use on a daily basis,” said Brian. “The Robbi had done such a good job in the previous eight years, that when the time came to replace it, we knew what our preferred choice would be. We visited SALTEX and after a demonstration following the show, purchased the Brush-Pro early this year.” 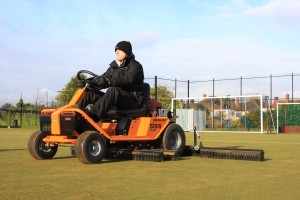 Synthetic surfaces require a good maintenance programme in place from installation. Failure to regularly remove dirt, leaf debris and other detritus from the surface can lead to contamination of the infill, which in turn prevents rainwater from draining freely through the carpet.

Brian says that all regular maintenance of the synthetic surface is carried out in-house by groundstaff at the school. “We need to ensure that the surface is always kept to a high standard as it’s not only used by pupils but also by the local community. The Brush-Pro needed to be small enough to be able to fit through a set of gates, yet powerful enough to cope with the weekly tasks we need to complete. In that respect, it’s great.”

“The oscillating brushes are by far its best feature as they enable us to not only get right into the surface but also control the moss on the edges of the surface. I’d have no hesitation in recommending the Brush-Pro to anyone looking after a synthetic surface,” said Brian.

For further information or a no obligation demonstration, please contact SISIS on 01332 824 777 or visit www.sisis.com
For more news, reviews and insightful views, you can follow SISIS on Twitter @SISISMachinery and like the company’s Facebook page – www.facebook.com/SISISMachinery. You can also view the latest SISIS videos by visiting www.youtube.com/SISISMachinery.