Sedgwick Cricket Club of the Westmorland League had a season to remember in 2013 both on the pitch and because of the pitch, thanks to Sherriff Amenity, one of the UK’s leading turf care and sports equipment suppliers.

The village club, just south of Kendal in Cumbria, topped the second division and took the League’s Fair Play trophy. A memorable hat trick of wins was completed by taking the Best Ground Award for accumulating the highest marks of all 21 clubs in the League’s two divisions from match by match assessment of pitches and outfields by visiting umpires. 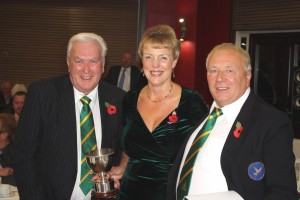 At the League’s recent awards dinner to collect the Best Ground trophy were the two clubmen who look after it, Eric Mackereth and Ken Illingworth.

Sedgwick has had a cricket club since the early 19th century, when one was formed by Lord Wakefield. The club as it is now was set-up in 1978 and games are played on the village ground by two senior and three junior teams. It achieved the best ground accolade amongst all of the West Moorland league clubs across south Cumbria, North Lancashire and West Yorkshire because of Eric and Ken’s tireless efforts, but Eric, also club Vice-Chairman, gave huge credit to an outsider.

“Ken does all the pitch preparation: I do the mowing, but we have to give a big vote of thanks to Kevan Grieve of Sherriff Amenity for his valuable advice over the past couple of years,” he said. “Our square and outfield have undoubtedly benefitted in a big way from soil analysis he regularly conducts and the feeding and maintenance programmes he’s suggested.

“Our pitch surfaces are now firmer and our outfield faster. Three centuries and three hat tricks last season: it’s never been a better venue for bat and ball. Clubs love to play here and say as much. We’re really proud of our ground, and our award.”

Kevan Grieve’s recommendations to Sedgwick CC over the past two seasons, which helped them take the Best Ground trophy, were:

Tank mix of Headland X-Tend and Relay Turf as a weed and feed treatment for the outfield, which also had Caste Off applied to stop worm casts.

The square was oversown with Johnsons J Wicket Seed and then given alternate liquid feeds of Headland N-Sure and Headland Turfite.